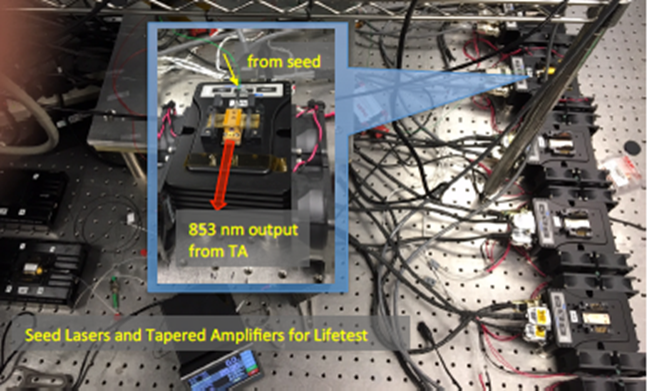 NASA GSFC has been working on an ESTO IIP - Cold Atom Gravity Gradiometer (CAGG)/Atom Interferometer Gravity Gradiometer (AIGG) for Geodesy since 2014 (Saif/551 – PI).  Significant progress has been made in the AIGG instrument development and demonstrated performance, but the TRL of the instrument remains at ~4.   Our main objective for this IRAD is to initiate a detailed assessment of the master oscillator used in the AIGG instrument, which builds upon the extensive data we collected on these lasers from the FY16 and FY17 IRAD efforts.

The master oscillators (MO) used in the current AIGG instrument being built by AOSense are (1) Distributed Bragg Reflector (DBR) laser from Photodigm and (2) the external cavity diode laser (ECDL) from AOSense.  During the development effort at AOSense, several of the DBR lasers from Photodigm suffered early failure.  The Photodigm DBR lasers have rated output powers in the 240 mW range and most of them were operating at output power of 190 mW (approximately 20% derating).  On the contrary, we have several Photodigm DBR lasers in house that we operated in our life test stations during the FY16 and FY17 IRAD efforts and have not seen any degradation after more than 2900 hours of total operating time.   Although ours were rated at half the output power, at 120 mW and we operated them at a derated power of ~90mW for the lifetest.

These DBR lasers were used to seed the tapered amplifiers (TA) in the life test station.  We continued to use the same DBR lasers in our FY17 lifetest of the TA’s.  The total operating time is currently >2900 hours, and these DBR lasers continued to operate nominally without any signs of degradation.

Given the differences between the failures observed at AOSense and our in-house effort, we believe it is critical to investigate the mechanisms that could lead to earlier failure and provide a viable path forward to mitigate this risk.  One of the concerns with using the DBR lasers at a derated level is the linewidth and frequency noise characteristics of these DBR lasers will vary as a function of operating current.

We have collected preliminary data showing the Photodigm DBR laser power spectral density (PSD) as function of operating current.  When the DBR laser is operated at 75 mA it has more noise compared to the same laser operating at higher current (130 mA and 170 mA).   It is our goals in this proposed effort to investigate and assess the performance of the DBR lasers and make recommendations on the laser operating conditions to minimize the failures observed by AOSense.

One of the more stringent requirements on the master oscillator in the AIGG instrument is the output power.   If the DBR laser needs to be derated to improve lifetime, then one option is to boost the output power using a semiconductor optical amplifier (SOA).  This is especially true in case the MO used is the ECDL from AOSense, which has a nominal output power of ~40 mW.  The addition of the SOA is a straightforward approach to boost the optical power, but this also could increase the noise of the output signal.  We propose to investigate the effect of the SOA on the master oscillator spectral quality and recommendation to the AIGG instrument team the best approach to improve lifetime without sacrificing the spectral quality that could affect overall science objectives.

With this kick-start activity in the risk reduction effort, we are well prepared to raise the TRL of the laser systems and position our instrument for upcoming Earth Venture calls for proposal, and also support a recently submitted proposal to the Earth Science Technology Office (ESTO) call for the Instrument Incubator Program (IIP).  This is a continuation of two IRAD activities from FY16 and FY17.  We plan to leverage the investment made during the past two years and reuse the lifetest station for testing the master oscillators and assess the long term performance by studying the spectral characteristics of the lasers as function of operating conditions.  Since the AIGG instrument operation depends strongly on the master oscillator, this effort is critical for the program and upcoming EVI or EVM calls.