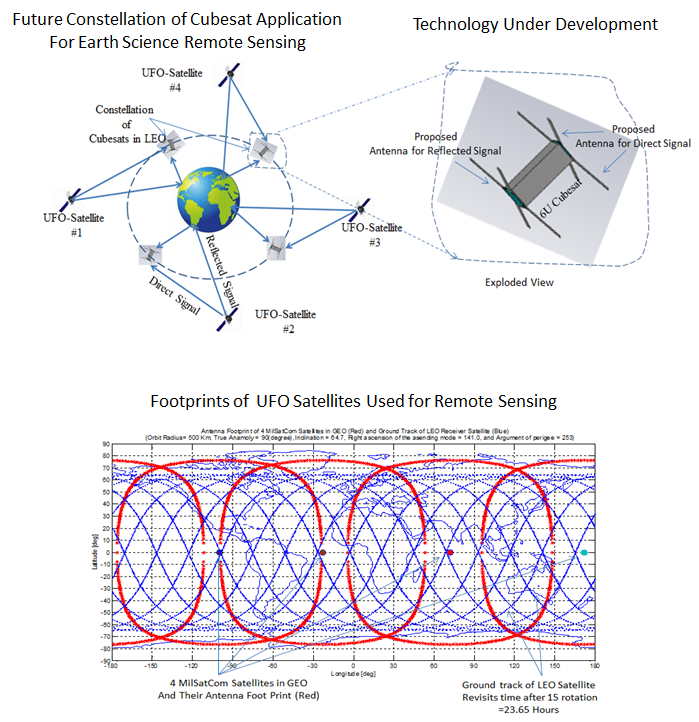 The main goal of the project is to design, fabricate, and test deployable VHF antennas for 6U Cubesat platforms to enable validation of root zone soil moisture (RZSM) estimation algorithms for signal of opportunity (SoOp) remote sensing.  The proposed work has a strong link for establishing a technology development path for maturing truly global direct surface soil moisture (SM) and RZSM measurement system (as shown in Figure 1) over variety of land covers with limited density restrictions.   In SoOp methodology, signals transmitted by already existing transmitters (known as transmitters of opportunity, in this case Military Satellite Communication (MilSatCom) System(known as Follow-on)) are utilized to measure properties of reflecting targets by recording reflected signals using a simple passive microwave receiver.

The project plans: (1) to develop and test a deployable VHF antenna technology for SoOp receiver for 6U Cubesat platforms; (2) to perform measurement of SM and RZSM using the proposed antennas;  and finally (3) to validate the RZSM and SM estimation algorithms from the measured data.   The proposed technology is to help the maturation of constellation of space borne Cubesats mission concept (as shown in Figure 1) for remote sensing of soil moisture (SM) and RZSM using MilSatCom System as transmitters of opportunity

Current observations of surface SM from space by L-band radiometers and radar are limited to indirect measurements of surface SM through moderate amounts of vegetation. This limitation is mainly due to the inability of L-band signals to penetrate through the vegetable canopy and top ground surface layer. To overcome the above limitation, low-frequency active radars operating have been investigated. However, these airborne observations are handicapped because of difficulties in getting permission from the FCC (Federal Communication Commission) and the NTIA (National Telecommunications and Information Administration) to radiate because of valid concern of radio frequency interference to existing users of these frequencies. Furthermore, because of its large weight, volume, and hardware and software complexity, extension of such systems to space-borne missions would be prohibitively massive and expensive.

Developing bi-static reflectometry creates the potential of directly observing SM and RZSM on a truly global basis from a constellation of small satellite-based receivers in low earth orbit.

2. US Dept of Agriculture for understanding surface and subsurface hydrology and soil conditions