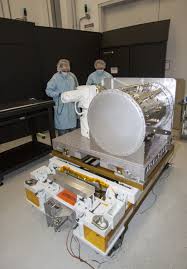 The Optical Payload for Lasercomm Science (OPALS) project, which is part of the JPL Phaeton early career employee hands-on training program, aims to demonstrate optical communications technology from the ISS to Earth. This is accomplished by transferring a video from OPALS hardware onboard the ISS to ar ground receiver at JPL's Optical Communications Telescope Laboratory (OCTL) in Wrightwood, California. To aid the OPALS in accurately pointing the downlink laser to the ground telescope, a laser beacon is transmitted from the OCTL to the ISS OPALS hardware on ISS. Each demonstration lasts for approximately two minutes, during which the ISS and ground telescope maintain line of sight. The OPALS instrumentation gathers technical data during these demonstrations, which is then studied to determine hardware performance.   The scientific instruments in near-Earth and deep-space-missions increasingly require higher communication rates to transmit acquired data back to Earth, or to support high-data-rate applications (e.g., high-definition video streams). Optical communications (also referred to as lasercomm) is an emerging technology in which the data is modulated onto lasers to transmit the information. Optical communications offers the promise of delivering much higher data rates than the state-of-the-art with RF beams. However, because laser beams are very narrow, the spacecraft must be able to very accurately point the laser beam to the receiving telescope on Earth as it travels across the sky, which is one of the primary challenges of lasercomm.   Optical communications has the promise of meeting the high-data-rate expectations of future scientific instruments flying on NASAs missions, and improving the interconnectivity between near-Earth assets, such as the ISS and Earth. OPALS is one of NASAs first demonstrations of an optical communications link from near Earth, and is designed to help chart the path for enabling optical communications in future missions. OPALS collects sensor data during the demonstrations to determine the performance of its laser link. The investigation team plans to use this data to advance the design and performance of future lasercomm links built to support NASAs space endeavors. Additionally, OPALS is used to educate a team of early career employees being trained as the next generation of JPL/NASA employees to develop space-based technologies.

OPALS will demonstrate optical communication by transferring a video from the OPALS payload on the ISS to a ground receiver at JPL's Optical Communications Telescope Laboratory (OCTL) in Wrightwood, California. As the ISS travels across the sky, a laser beacon will be transmitted from the ground telescope to the OPALS payload and tracked. While maintaining lock on the uplink beacon using a closed-loop-control system and a two-axis gimbal, the OPALS flight system will downlink a modulated laser beam with a formatted video. Each demonstration lasts approximately 100 seconds as the ISS payload and ground telescope maintain line of sight.

The scientific instruments in near-Earth and deep-space missions increasingly require higher communication rates to transmit their gathered data back to Earth or to support high-data-rate applications (e.g., high-definition video streams). Optical communication technologies can enable this.

October 2009: Project Start
April 2014: Closed out More » Less «
Closeout Summary: To request closeout information for this project, please send an email with the Subject “TechPort Closeout Report Request” to hq-aes@mail.nasa.gov and specify which project closeout report you are requesting.