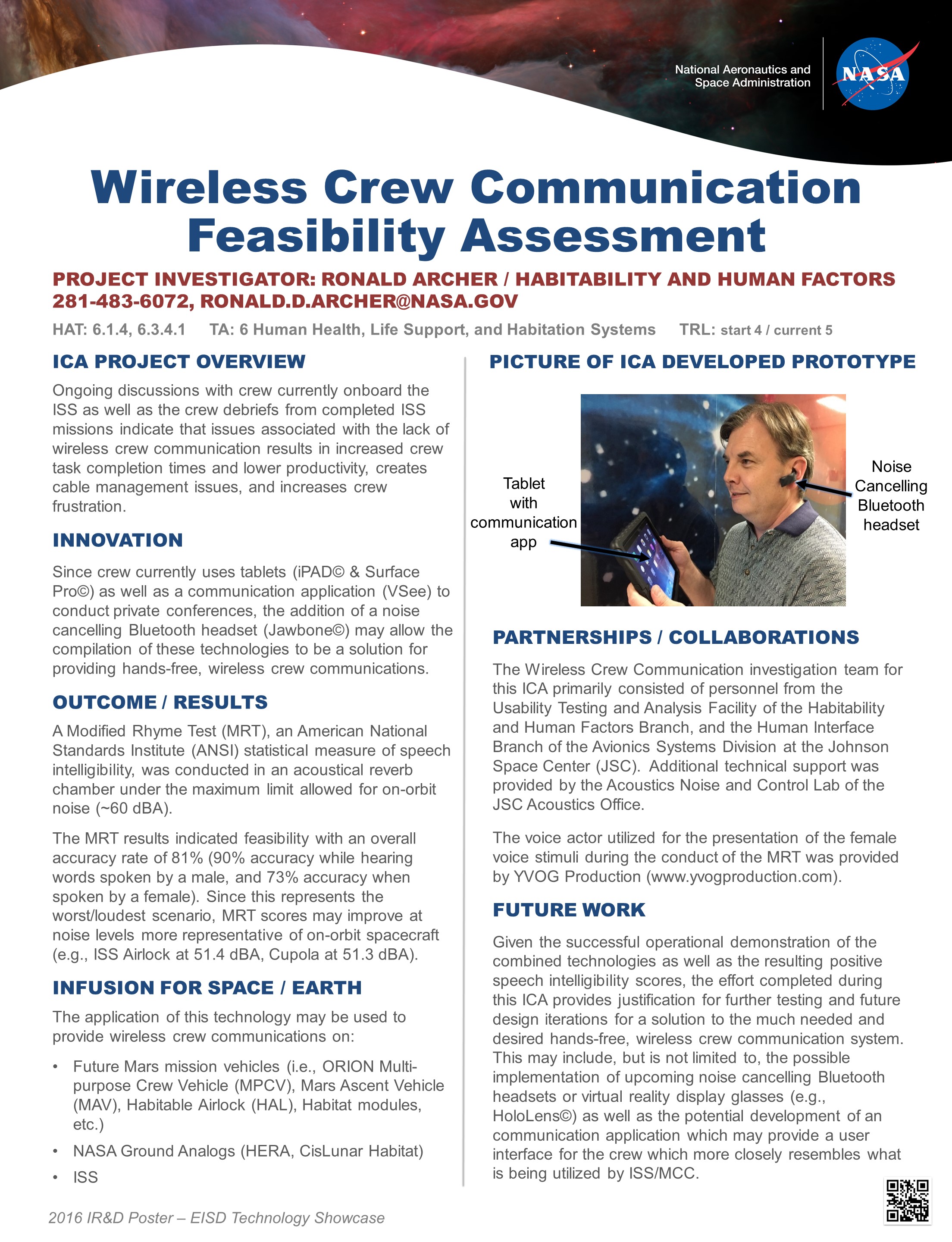 Since crew currently uses tablets (iPAD© & Surface Pro©) as well as a communication application (VSee) to conduct private conferences, the addition of a noise cancelling Bluetooth headset (Jawbone©) may allow the compilation of these technologies to be a solution for providing hands-free, wireless crew communications.

In order to communicate with each other or ground support, the crew onboard the International Space Station (ISS) currently use the Audio Terminal Unit (ATU) which are located in most modules. In order to use the ATU, the crew must stop their current activity, travel to a panel, and speak into a wall-mounted microphone, or use a handheld microphone or headset that is cabled to a panel. This unnecessarily increases task times, lowers productivity, creates cable management issues, and thus increases crew frustration.

Ongoing discussions with crew currently onboard the ISS as well as the crew debriefs from completed ISS missions indicate that issues associated with communication require crew time and cause inefficiencies in operations. Communication is considered by some to be one of the critical aspects of a human long-duration mission, such as missions to Mars. Crew depends on communication with the ground via telecommunication systems, and with fellow crewmembers. Noise may cause comprehension problems and impacts crew time by requiring crewmembers to repeat messages or travel closer to other crewmembers to be heard.  The long distance to be traveled to other crewmembers or to audio terminal units (ATUs) also requires time.  Finally, communication with the ground, which also requires travel to the ATUs, takes time away from other tasks.  Additionally, frequent interruptions from the ground cause a general increase in required time to complete a task as well.

Since crew currently uses the Apple iPAD© and Microsoft Surface Pro 3© tablets, an Modified Rhyme Test (MRT) was conducted utilizing both tablets while paired with noise cancelling bluetooth headsets, Jawbone-ERA ©.  The tablets were using a COTS communication application already utilized by NASA, VSee©. The MRT is an American National Standards Institute (ANSI) standard for statistical measure of speech intelligibility over communication systems. The listener was shown a six-word list and then asked to identify which of the six were spoken by the talker. A carrier sentence is usually used (i.e. “Please mark <test word> now.”). The test word is spoken without emphasis or accent with the sentence being the same for each test word. The MRT was conducted in an acoustical reverb chamber under the maximum limit allowed for on-orbit noise (60 dBA).

The MRT results indicated feasibility with an overall accuracy rate of 81% (90% accuracy while hearing words spoken by a male, and 73% accuracy when spoken by a female). Since this represents the worst/loudest scenario, MRT scores may improve at noise levels more representative of on-orbit spacecraft (e.g., ISS Airlock at 51.4 dBA, Cupola at 51.3 dBA).

Given the successful operational demonstration of the combined technologies as well as the resulting positive speech intelligibility scores, the effort completed during this ICA provides justification for further testing and future design iterations for a solution to the much needed and desired hands-free, wireless crew communication system. This may include, but is not limited to, the possible implementation of upcoming noise cancelling Bluetooth headsets or virtual reality display glasses (e.g., HoloLens©) as well as the potential development of an communication application which may provide a user interface for the crew which more closely resembles what is being utilized by ISS/MCC.

The investigation team for this ICA primarily consisted of personnel from the Usability Testing and Analysis Facility of the Habitability and Human Factors Branch, and the Human Interface Branch of the Avionics Systems Division at the Johnson Space Center (JSC).  Additional technical support was provided by the Acoustics Noise and Control Lab of the JSC Acoustics Office. The voice actor utilized for the presentation of the female voice stimuli during the conduct of the MRT was provided by YVOG Production (www.yvogproduction.com).

The application of this technology may be used to provide wireless crew communications on: