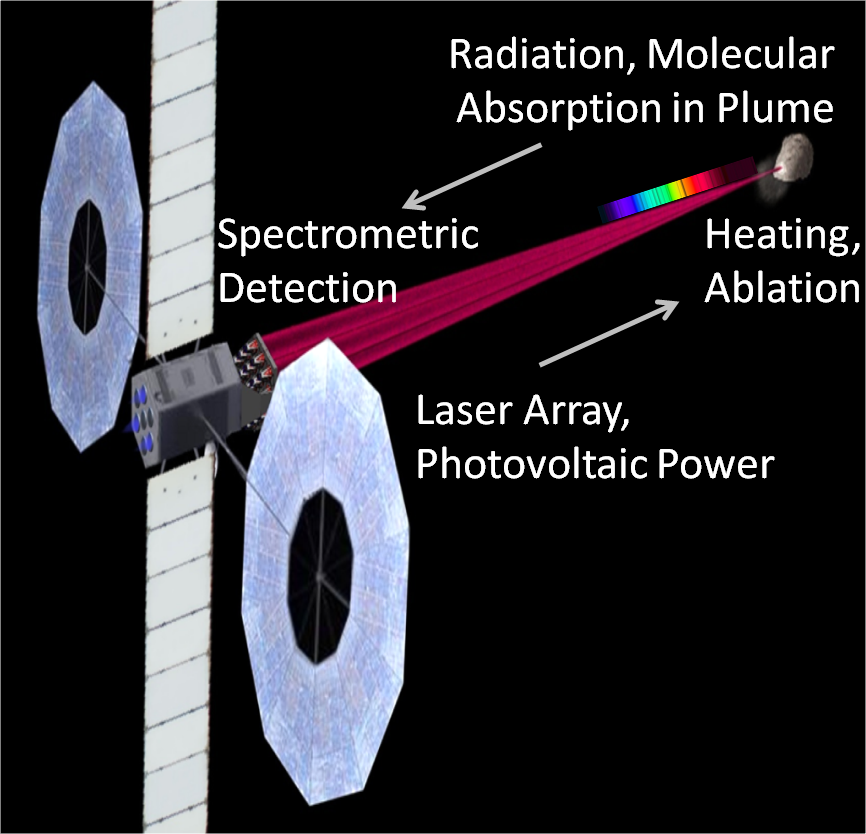 We propose a system capable of probing the molecular composition of cold solar system targets such as asteroids, comets, planets and moons from a distant vantage. Our concept utilizes a directed energy beam to vaporize or sublimate a spot on a distant target, such as from a spacecraft near the object. With sufficient flux, our published results indicate that the spot temperature rises rapidly, and evaporation of materials on the target surface occurs (Hughes et al., 2015; Lubin and Hughes, 2015; Lubin et al., 2014). The melted spot serves as a high-temperature blackbody source, and ejected material creates a molecular plume in front of the spot. Molecular and atomic absorption of the blackbody radiation occurs within the ejected plume. Bulk composition of the surface material is investigated by using a spectrometer to view the heated spot through the ejected material. We envision a spacecraft that could be sent to probe the composition of a target asteroid, comet or other planetary body while orbiting the targeted object. The spacecraft would be equipped with an array of lasers and a spectrometer, powered by photovoltaics. Spatial composition maps could be created by scanning the directed energy beam across the surface. Applying the laser beam to a single spot continuously produces a borehole, and shallow sub-surface composition profiling is also possible. Our initial simulations of laser heating, plume opacity, material absorption profiles and spectral detectivity show promise for molecular composition analysis. Such a system has compelling potential benefit for solar system exploration by establishing the capability to directly interrogate the bulk composition of objects from a distant vantage. We propose to develop models, execute preliminary feasibility analysis, and specify a spacecraft system architecture for a hypothetical mission that seeks to perform surface molecular composition analysis and mapping of a near-earth asteroid (NEA) while the craft orbits the asteroid.

This system has a compelling potential benefit for solar system exploration by establishing the capability to directly interrogate the bulk composition of objects from a distant vantage.

July 2016: Project Start
June 2017: Closed out More » Less «
Closeout Summary: This document is the Final Report for NASA Innovative Advanced Concepts (NIAC) Phase I Grant 15-NIAC16A-0145, titled Molecular Composition Analysis of Distant Targets. The research was focused on developing a system concept for probing the molecular composition of cold solar system targets, such as Asteroids, Comets, Planets and Moons from a distant vantage, for example from a spacecraft that is orbiting the target (Hughes et al., 2015). The orbiting spacecraft is equipped with a high-power laser, which is run by electricity from photovoltaic panels. The laser is directed at a spot on the target. Materials on the surface of the target are heated by the laser beam, and begin to melt and then evaporate, forming a plume of asteroid molecules in front of the heated spot. The heated spot glows, producing blackbody illumination that is visible from the spacecraft, via a path through the evaporated plume. As the blackbody radiation from the heated spot passes through the plume of evaporated material, molecules in the plume absorb radiation in a manner that is specific to the rotational and vibrational characteristics of the specific molecules. A spectrometer aboard the spacecraft is used to observe absorption lines in the blackbody signal. The pattern of absorption can be used to estimate the molecular composition of materials in the plume, which originated on the target. Focusing on a single spot produces a borehole, and shallow subsurface profiling of the target's bulk composition is possible.
Closeout Link: https://www.nasa.gov/feature/molecular-composition-analysis-of-distant-targets