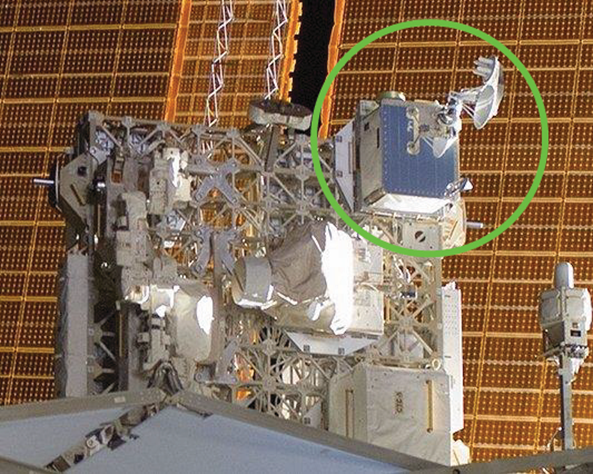 The SCaN Testbed is an experimental communication system that is located on the truss of the International Space Station (ISS). The technology has over 3000 hours of operations since launch in 2012, and is paving the way for infusion of SDRs and associated communications, navigation, and networking software applications into the SCaN integrated network. The project is led by the Glenn Research Center (GRC), and includes experiment activities by GRC, Jet Propulsion Laboratory, Goddard Space Flight Center, Johnson Space Center, industry, academia, and international space agencies.  Experimenters develop software for the Testbed's S- and Ka-Band radios and communicate through the Tracking and Data Relay Satellite System (TDRSS) or direct to a ground station. SCaN Testbed is the first NASA mission to support full-duplex space-to-space Ka-band communication, making it an ideal evaluation platform for missions considering the higher bandwidth and data rates that Ka-band can provide.

The SCaN Testbed is an experimental communication system that is located on the truss of the International Space Station (ISS). The SCaN Testbed has been infused into the SCaN Program, which is a part of NASA's Human Exploration and Operations Mission Directorate. The SCaN Testbed project has developed and enabled the infusion of multiple new software applications since launch that enhance the communications, navigation, and networking performance of the system. These applications are compliant with NASA's Space Telecommunications Radio System (STRS) architecture standard, which means they are easily portable to other STRS-compliant commercial radios.

Understanding the development, verification, and operations of SDRs is critical to reduce risk and cost to future missions as SDRs emerge as the radio technology of the future. The International Space Station provides an ideal operations platform to verify SCaN Testbed technologies by enabling daily, on-orbit reconfiguration of the SDRs between existing and new software applications. The SCaN Testbed has advanced the technology readiness level (TRL) of SDRs from 4 to 8.

SCaN Testbed technologies earned three prestigious awards in 2013 including a Research & Development (R&D) 100 award for the first Ka-band transceiver, Wireless Innovation Forum Technology of the Year runner up for a breakthrough product or technology in the field of Software Defined or Cognitive Radio, and ISS Top Technology for Exploration.

Experimenters from around the Agency, small businesses, and universities create a broad base of SDR platform and application experts across the nation.  Working together, these experts will develop the communications systems of the future. SCaN Testbed continues to be recognized for the contributions it is making to enhance NASA's space communications capability.

SCaN Testbed was decommissioned in May 2019, following nearly 7 years of successful operations in space. The payload was removed from ISS on May 11, 2019 using the robotic arm and placed in the trunk of the SpaceX CRS-17 vehicle. The trunk and SCaN Testbed then burned up in Earth's atmosphere on June 3, 2019 during controlled re-entry.

Lessons, data, and software developed by the SCaN Testbed project have already impacted over 20 different projects or missions. For example, the Ka-band antenna pointing system operates with such accuracy that it determined the amount of flexure in the ISS truss.  Also, the Testbed was used for acceptance testing of NASA's newest TDRS satellites, TDRS-K and TDRS-L, along with early verification testing of new ground hardware at the White Sands Complex.  STRS compliant software from SCaN Testbed is making its way to JPL's next generation SDR and is planned for use in several Mars missions.  Industry is now producing STRS-compliant follow-on radios based on the flight SDRs, and to date over 80 space radios are planned.

After seven successful years, and more than 4,200 hours of testing, NASA’s Space Communications & Navigation (SCaN) Testbed mission ended on June 3, 2019 as it burned up in the trunk of SpaceX CRS-17 upon reentry into Earth’s atmosphere.

The Ka-band radio experiment was extremely successful, eventually evolving into successful commercial products used for global aircraft and ship tracking on the Iridium satellite network. The commercialization and the services created helped the Ka-Band radio earn an R&D 100 award-winning technology in 2013, and the technology was inducted into the Space Technology Hall of Fame this year.

The SCaN Testbed also contributed to the Space Telecommunications Radio System (STRS) architecture by developing nine compliant radio waveforms, or reusable software components, which increase the reliability of SDRs, while decreasing the development time and cost. It also contributed to the STRS repository, which allows for future missions to seamlessly reuse prior software developments and investments. STRS have become a NASA Standard, and commercial companies are now using STRS radios and applications in their commercial spacecraft.

Over the years, NASA Glenn partnered with nearly 40 organizations, including other NASA centers, universities, commercial companies and several foreign space agencies, to use the SCaN Testbed to achieve many firsts in radio communication, networking and navigation capabilities. It was the first NASA mission to use Ka-band within NASA’s Space Network and the first to receive Global Positioning System (GPS) Civil Navigation messages in space. Earlier this year, the testbed was also the first user of the European Galileo E5A navigation signal, demonstrating the benefits of merging Galileo and GPS to precisely determine orbits of spacecraft.

During its lifespan, the testbed was also responsible for increasing mission planners’ trust in SDR technology. SCaN Testbed challenged the perception that even a single reconfiguration poses significant mission risk by routinely – more than 850 times – demonstrating the reconfiguration of radios in space. The ability to change or modify radio operations reduces risk by allowing the communication system to work around unexpected hardware or system failures, and providing multiple communications capabilities from the same hardware.

In 2018, the SCaN Testbed demonstrated the first-ever adaptive space link controlled entirely by an artificial intelligence algorithm. The Cognitive Communications Project will follow in these footsteps, focusing on technologies that increase the autonomy and reliability of space communications in unpredictable and distant environments.