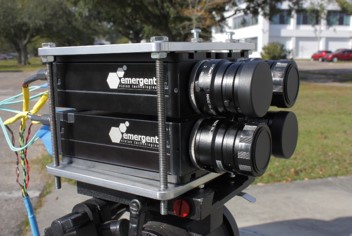 High-speed video recording of rocket engine tests has several challenges. The scenes that are imaged have both bright and dark regions associated with plume emission (bright) and solid bodies (dark and bright) that are visible because light from other sources reflects off them. Recent advances in High Dynamic Range (HDR) technologies can address the challenges of acquiring high-quality rocket engine test imagery in a convenient, safe and effective manner. This project extends techniques developed in a previous project to develop a high-speed, color, extreme HDR video imaging capability with four boresighted HD video cameras appropriate for imaging targets several to many meters from the camera system.

High-speed video cameras do not have sufficient dynamic range to properly expose both bright and dark regions that occur during rocket engine testing without partial saturation due to the limited bits (typically 8-10) available. HDR imaging is a technique that uses two or more exposures of the same scene combined with processing to fuse the different exposures into a single image that can display the entire dynamic range of the scene. For this project a prototype multicamera HDR imaging system was designed and constructed, and included a custom camera mount. The cameras were integrated into a imaging platform, camera calibration was performed, and a custom software workflow to fuse raw Bayer array imagery into color HDR imagery was developed. The technique was successfully used on a Hybrid Desktop Demonstration Unit and other targets of opportunity.

A high-speed, color, extreme HDR video imaging capability that can be used to monitor high energy engine tests from distances up to many meters away was developed. HDR imaging is a technique that uses two or more exposures of the same scene that, combined with processing, fuses the different exposures into a single image that can display the entire dynamic range of the scene without saturation. This project combined multiple streams of HD video using computational photography and computer vision techniques to produce a cutting edge, color, extreme HDR recording capability.

NASA uses for HDR imaging including monitoring rocket launches, space-based imaging from rovers and other spacecraft applications that will be explored. Orbital ATK, a NASA SSC customer, has expressed an interest in this technology. It is expected that other engine manufacturers will be interested in this technology to support their long range testing.