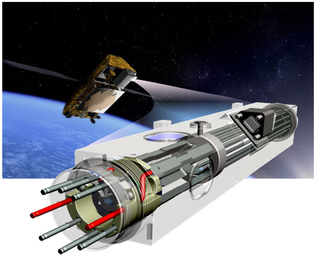 The Deep Space Atomic Clock (DSAC) project will develop a small, low mass atomic clock based on mercury-ion trap technology and demonstrate it in space providing the time keeping stability needed for the next-generation of deep space navigation and radio science. The mercury-ion clock coupled with an ultra-stable oscillator and a Global Positioning Satellite (GPS) receiver will launch as a hosted payload on the Surrey Orbital Test Bed (OTB) mission. While in orbit, the DSAC payload will make use of GPS signals to perform precision orbit determination and confirm the clock's performance. After the demonstration, future missions to both Earth orbit and deep space will be able to use the results of the DSAC demonstration to develop customized versions of DSAC for operational purposes. This demonstration will advance the TRL of the mercury-ion atomic clock from the laboratory (TRL5) to an advanced prototype flown in space (TRL7) resulting in sufficient data and experience to develop the engineering roadmap to an eventual operational version for space missions.

DSAC enables a shift to a more flexible/extensible 1-Way radionavigation architecture from the current 2-Way model. Program is a fundamental to autonomous radionavigation, and will increase navigation and radio science tracking data accuracy by 10 times and quantity by 2 times. DSAC has the potential to improve clock performance of the next GPS system by 50x.