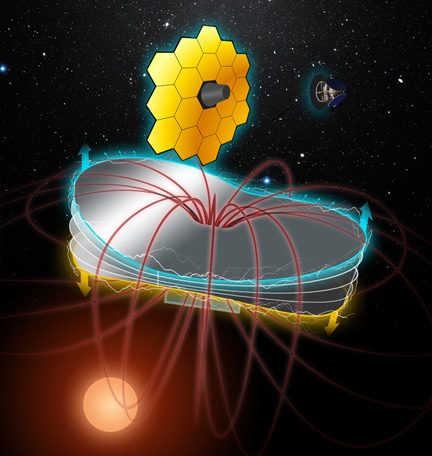 One of the primary reasons space missions are so expensive is the extremely high cost per unit of mass to launch a spacecraft. Making spacecraft lighter can greatly reduce these launch costs, leading to more affordable missions and thus more opportunities for on-orbit research. This study will examine a new, lighter kind of spacecraft structural support system, one in which electromagnetic forces generated by running current through high-temperature superconductors (HTSs) move and unfold parts of the structure from its stowed position within the launch vehicle. This would allow for the replacement of heavier components like physical actuators and support beams with coils that repel and attract each other magnetically or large coils that start in a folded position and expand due to their own magnetic field when current is run through them. The Phase I study will design several different HTS structural systems that perform the same function as physical structural systems and then examine through tradespace analyses for which applications HTS designs are preferable to traditional designs and thus warrant further study.

We hope to provide an additional, revolutionary option to the spacecraft structural design space that, if resultant in a net reduction of mass over equivalent traditional alternatives, could increase the quantity and quality of in-space research.

September 2011: Project Start
September 2012: Closed out More » Less «
Closeout Summary: In this Phase I, we have conducted an initial feasibility study for the use of high-temperature superconducting coils as deployment and support elements in spacecraft structures. We have also introduced system performance trades that will be further quantified in the Phase II work. On the basis of the work performed in this Phase I study, we have come to the following conclusions: 1) The fundamental physics support the basic concept of using electromagnets for deployment. 2) With existing technology and capabilities, the use of HTS coils for the deployment activities investigated herein is achievable, though with significant work to be done in dynamic controllability, system optimization, sizing and scaling, thermal control, and mission integration analysis. Our Phase II work will address many of these topics as well as economic viability. By the end of Phase II, we aim to have completed and tested an experimental flexible cryogenic heatpipe, a technology integration case study of JWST, laboratory experimental demonstrations of HTS coils unfolding panels and separating while superconducting, and models calibrated both by experiments and analytical solutions. These are the first steps along the HTS technology demonstration path, and those steps combined with the foundation laid in our Phase I report and the feasibility and implementation analysis to be conducted in Phase II will bolster the credibility and prepare the technology for further TRL advancement.