Interplanetary CubeSats: Opening the Solar System to a Broad Community at Lower Cost 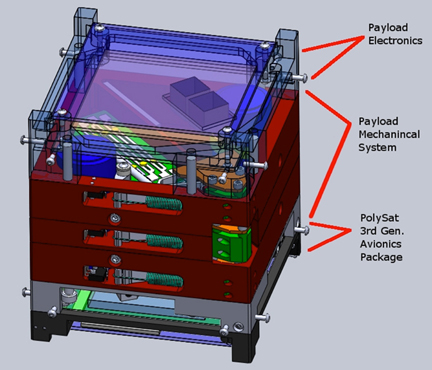 Today, Solar System exploration missions are the exclusive domain of space agencies and their scientists and engineers who can muster multi-hundred-million dollar budgets. While their accomplishments are broad, highly sophisticated and literally out of this world, the high cost limits our pace of important discoveries. Interplanetary CubeSats offer an opportunity to conduct focused science investigations around the inner Solar System at a cost ten times lower than missions mounted today. In much the same way that CubeSats weighing a few pounds have dramatically increased low cost access to space experimentation in low Earth orbit, this study intends to focus development of six technologies in unison so as to enable dramatically lower cost exploration of the Solar System and our Earth's more distant environs. Using the pressure of sunlight, a gravitationally defined Interplanetary Superhighway, advanced electronics and instrumentation, and laser communications, may extend the turn-of-the-millennium CubeSat standard for nanosatellites to distances far beyond Earth's magnetic cocoon. CubeSats in low Earth orbit have enabled dozens of universities to develop and place in orbit student-led, student-designed, student-built, and student-operated satellites investigating all manner of scientifically exciting phenomena, while giving graduates of these programs a competitive edge they bring to American technology and industry. Additionally, CubeSats have enabled Government-sponsored space experimentation and technology development on an accelerated schedule for unprecedented low cost. If successful, this system study of the technologies to enable Interplanetary CubeSats will open the door to a similar revolution in access to space and new discoveries beyond Earth.

A. A useful interplanetary s/c at 10 kg is dramatically lighter than any previous, enabling utilization of excess payload capacity to GEO and beyond to produce additional science and exploration results.#B. Order-of-magnitude reduction in cost of very focused exploration missions beyond Earth.#C. Combining A & B makes more missions to more destinations possible, moving Solar System exploration from a few missions per decade to a few missions per year.#D. Opens beyond-Earth destinations to advanced elements of the CubeSat community, including hands-on education of college- and graduate-level students.#E. Optical telecom of small mass, size, power and cost will be valuable to other missions. May allow reduction of costs from traditional rf and DSN utilization.#F. Introduces solar sail application to other NASA missions, permitting unprecedented maneuvering for very small s/c at low cost; provides deltaV of 5-20+ m/sec/day without propellant, enabling inexpensive transport to and among multiple destinations

September 2011: Project Start
September 2012: Closed out More » Less «
Closeout Summary: Through our NIAC-sponsored work, we have developed a low-TRL concept showing that spacecraft/payloads useful for Solar System exploration, astrophysics, space physics, and heliophysics can utilize a new Interplanetary CubeSat architecture, enabling lower-cost, up-close measurement of distant destinations, including Mars, asteroids, comets and the Moon. The earliest Interplanetary CubeSats, venturing to cis-lunar space and beyond to ~1 AU distance from Earth, should be feasible in the near future. Later, missions to Mars, the asteroid belt, and high heliocentric latitudes will be possible. Continuing advancements of the noted technologies would enable a much broader set of missions than heretofore thought possible with low launch mass, and at comparatively low cost. 7 NASA-funded missions in development (2 ready for launch now) to deep space, moon, Mars, asteroid destinations. NIAC legitimized the idea of cubesats that were once thought of as 'toys'. Now it's a very low cost interplanetary exploration product that produces good science. NIAC played a minor role, but with huge leverage in what is now the cubesat industry.