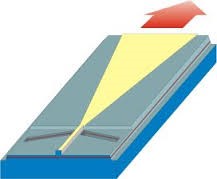 NASA GSFC has been working on an ESTO funded Instrument Incubator Program (IIP) Cold Atom Gravity Gradiometer for Geodesy since 2014.  Significant progresses have been made in instrument development.  One of the remaining tasks that is beyond the scope of the current IIP is an efficient power scaling approach and robust packaging for the three laser systems needed for future space deployment.  This effort is to begin the breadboard effort with emphasis on power scaling and packaging design that has a direct path for space.

This proposed task is to initiate a path toward space qualifying the laser transmitters for gravity gradiometer.  These laser systems require the use of semiconductor tapered amplifiers (TAs) for power scaling of low power master oscillator.  The wavelength is centered in the 853 nm regime for Cesium atoms.    Tapered amplifiers was first introduced in the late 1990's and received a lot of interests due to the compact design and high brightness output.  Currently there are two major vendors offer this type of amplifiers.   For the Gravity Gradiometer effort, we have prepared a plan to bring the laser systems to TRL6 in a 36 month program.   This IRAD effort represents an early start in performing studies in the optical, optomechanical, thermal and electrical systems that are required to mount, operate and inject light into and beam shaping the output beam is paramount in making the TRL-6 plan successful.