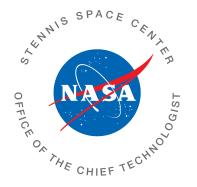 In an effort to meet NASA thermal management needs, this project is enhancing an existing textile based thermal barrier coating technology (developed by SciGenesis) for use as a protective barrier technology for engine test stand hardware and infrastructure.  This project will evaluate the performance of this coating technology for protection from high thermal flux and protection of decking from erosion. Ceramic coatings will be employed in this evaluation because they can be applied to metals and other substrates to improve performance in high temperature harsh environments. These ceramic coatings are often used to promote oxidative stability and increase resistance to corrosion and wear.

Components of an existing thermal barrier coating in applications related to existing NASA thermal management needs will be evaluated. These needs include a desire to protect downstream structural hardware from high thermal flux, offer a protective barrier to ducts, valves and other piping and to potentially offer an ablative surface coating to protect platform decking from erosion.

During this effort, objectives are to: (1) identify key performance criteria required for the transition of our thermally reflective coating, including defining substrate identity, surface preparation treatments, coating composition and application method, thermal, and mechanical characterization of the coating and (2) define performance limits and suitable use environments of the resulting prototype thermal barrier coating and prepare a coating development plan using preliminary data and identified suitable use environments

Benefits to NASA funded missions include potential protection of downstream structural hardware from high thermal flux, protective barrier to ducts, valves and other piping, and to potentially offer an ablative surface coating to protect platform decking from erosion due to heat, high impact forces and chemicals.

Given NASA’s harsh environment needs as it relates to rocket engine testing the thermal barrier coatings being developed within this project may benefit NASA unfunded missions & planned missions by providing protection to downstream structural hardware from high thermal flux, offer a protective barrier to valves, piping and other infrastructure elements while offering an ablative surface coating to protect platform decking from erosion.

Benefits to the commercial space industry include improving material performance in high temperature aggressive environments. These types of coatings are often used to promote oxidative stability and increase resistance to corrosion and wear.

Benefits to other government agencies include the development of a high performance camouflage face paint (by SciGenesis) to protect soldiers from severe burns resulting from ballistic and flash-fire heat sources. Adaptions to this innovative approach to textiles in an effort to provide whole-body protection is being developed that has potential utility for all branches of the US military. Each of these applications has required the need for new coating formulation and processing technique modifications, which are specific to the individual application. These applications are in addition to the benefits observed by improving material performance in high temperature environments.