Exposing Microorganisms in the Stratosphere for Planetary Protection (E-MIST) 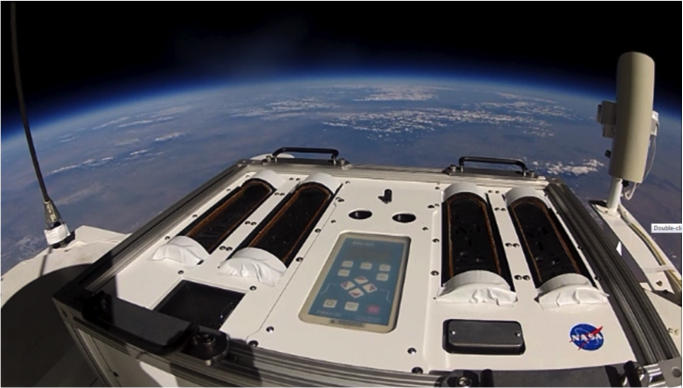 Earth’s stratosphere is similar to the surface of Mars: rarified air which is dry, cold, and irradiated. E-MIST is a balloon payload that has 4 independently rotating skewers that hold known-quantities of spore-forming bacteria isolated from spacecraft assembly facilities at NASA. Knowing the survival profile of microbes in the stratosphere can uniquely contribute to NASA Planetary Protection for Mars.

Introduction:  We designed, built and flew a self-contained payload, Exposing Microorganisms in the Stratosphere (E-MIST), on a large scientific balloon launched from New Mexico on 24 Aug 2014 [1]. The payload carried Bacillus pumilus SAFR-032, a highly-resilient spore-forming bacterial strain originally isolated from a NASA spacecraft assembly facility. Our balloon test flight evaluated microbiological procedures and overall performance of the novel payload. Measuring the endurance of spacecraft-associated microbes at extreme altitudes may help predict their response on the surface of Mars since the upper atmosphere also exerts a harsh combination of stresses on microbes (e.g., lower pressure, higher irradiation, desiccation and oxidation) [2].

Materials and Methods:  Our payload (83.3 cm x 53.3 cm x 25.4 cm; mass 36 kg) mounted onto the exterior of a high altitude balloon gondola. Four independent "skewers" rotated 180° to expose samples to the stratosphere. During ascent or descent, the samples remained enclosed within dark cylinders at ~25 °C. Each skewer had a base plate holding ten separate aluminum coupons with Bacillus pumilus spores deposited on the surface. Before and after the flight, B. pumilus was sporulated, enumerated and harvested using previously described techniques [3–5].

Major payload components were a lithium-ion battery, an ultraviolet (UV) radiometer (400 to 230 nm), humidity and temperatures sensors, and a flight computer. During the test flight, samples remained in a sealed position until the payload reached the lower stratosphere (~ 20 km above sea level). Next, the flight computer rotated the skewers into the outside air. After a short rotation demonstration (2 seconds), all skewers reverted to the closed position for the remainder of the flight. The payload continued floating at an altitude of 37.6 km for 4 hours before beginning a 23 minute descent on parachute.

Results and Discussion: Our first test flight examined unknowns associated with sample transportation, gondola installation, balloon ascent/descent, and time lingering in the New Mexico desert awaiting payload launch and recovery. We created a batch of experimental control coupons (each containing approximately 1 x 106 spores) used throughout the investigation for ground and flight test purposes. Several treatment categories were evaluated: Lab Ground Coupons (kept in the KSC laboratory); Transported Ground Coupons (traveled to New Mexico and back but not installed in payload); and Flight Coupons (flown). A subset of coupons from each treatment category were processed, resulting in statistically equivalent viability (Kruskal–Wallis rank-sum test at a 95% confidence level). Taken together, nearly identical viability from all coupons indicate that balloon flight operations and payload procedures did not influence spore survival. A negative control (blank, sterile coupon) was also flown to verify payload seals prevented outside contamination.

A species-specific inactivation model that predicts the persistence of microbes on the surface of Mars is one of many possible outcomes from balloon experiments in the stratosphere. The simplicity of the payload design lends itself to customization. Future investigators can easily reconfigure the sample base plate to accommodate other categories of microorganisms or molecules relevant to the Planetary Protection community. If future flights exposed microbes for hours, we would expect to see a rapid inactivation. Smith et al. [6] simulated stratospheric conditions and measured a 99.9% loss of viable Bacillus subtilis spores after only 6 hours of direct UV irradiation. Earth’s stratosphere is extremely dry, cold, irradiated, and hypobaric, and it may be useful for microorganisms isolated from NASA spacecraft assembly facilities to be evaluated in this accessible and robust Mars analog environment.

NASA Astrobiology Roadmap: Broadening our knowledge both of the range of environments on Earth that are inhabitable by microbes and of their adaptation to these habitats will be critical for understanding how life might have established itself and survived in habitats beyond Earth.

E-MIST will carry spore-forming bacteria (extremophiles resistant to harsh conditions) that were previously isolated from spacecraft assembly facilities at KSC. We know these microbes are traveling to Mars on NASA spacecraft assembled at KSC; our objective is to measure if they can survive once reaching the Red Planet.

Microbes must survive pressure ~1 to 10 mbar, temperatures from 0 to -100 °C, low water availability at < ~20% relative humidity, and high ionizing radiation levels). Knowing the survival profile of microbes in the stratosphere can uniquely contribute to NASA Planetary Protection policies. If a microbe can survive in the stratosphere, it can probably survive on the surface of Mars as well. Back here on Earth, the upper atmosphere is a natural laboratory for mining genes that guard or restore radiation-damaged biomolecules.