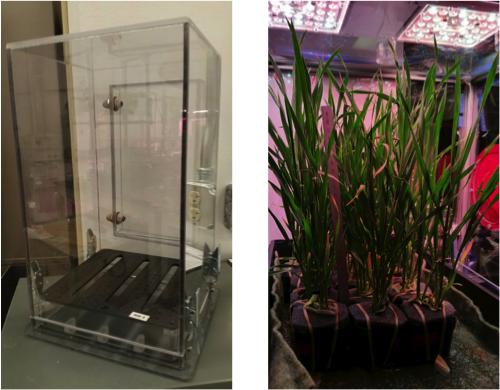 Plant-based Environmental Control and Life Support Systems (ECLSS) enable human existence beyond Low Earth Orbit (LEO) by providing oxygen, water and food. The root modules are key to success of sustainable plant-based ECLSS. In microgravity, hydroponics is not viable as gases separate from fluids, thus plants are grown in soil substrates, which are bulky and must be maintained for optimal plant growth. Soil substrate selection also impacts ECLSS self-sufficiency. Savings in resupply mass and volume are possible if soil is developed in-situ from regolith found on moons or planets. Biochar, a soil amendment used by ancient civilizations to improve soil fertility that promotes plant health and root zone microbes, can be produced by pyrolysis of plant biomass. The goal is to study the effect of biochar on sequential crop plantings in a single root module. The objectives are: 1) follow changes in root-microbe interactions using metagenomic techniques and next-generation sequencing, 2) measure changes in microbial populations during sequential cropping in a single root module, and 3) examine effect of biochar amendments on soil microbe communities and plant growth.

This study requires the characterization of root-microbe interactions, which can only be accomplished using state-of-the-art metagenomic techniques. Two 3D-printed root modules, developed at KSC for the Advanced Plant Habitat spaceflight growth chamber, will be planted with two soils: 1) Turface 1-2 mm, and 2) Turface 1-2 mm amended with biochar. Wheat plants will be used because they grow fast and have extensive roots. Each root module will be planted, harvested after 20 days of growth, dried by removing water with a syringe, and replanted three additional times without removing the roots from the previous crops. Thus, the roots from each harvest remain and decay in each root module. Dynamic changes in microbial communities will be followed using metagenomic analysis of 6 soil core samples from each root module per planting. The goal is to characterize plant growth and changes in microbial population from croppings in a single root module.

The study of root/microbial interactions is possible using Kennedy Space Center’s new Illumina MiSeq next generation sequencer because many of the microbes growing in root modules cannot be cultured. The present study aims at expanding the state of the art of studies of root/microbe interactions by observing changes in these interactions during the growth of sequential crops in the same root module. Furthermore, the use of biochar for mitigating the effects of root decay from previous crops will be studied. Biochar is important because it helps in recycling carbon and represents an avenue for ISRU of inedible biomass.

The use of single root modules and biochar may result in less resupply costs to space habitats as improved plant cultivation affects the sustainability of future plant-based ECLSS used in  long-term missions beyond Low Earth Orbit (LEO), where resupply of consumables (i.e., food and fresh soils) may be impossible.

The use of Biochar will benefit food production in space because it can be used to amend lunar and martian regolith for use as plant growth media.

The results from this study will benefit USDA research on the use of biochar for plant growth. The biochar we used was provided by USDA.