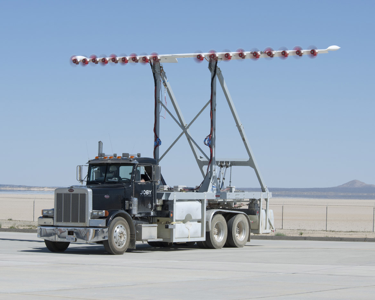 In Spring 2015, NASA and its commercial partners ran full-scale ground tests of a LEAPTech experimental wing. Called the Hybrid-Electric Integrated Systems Testbed (HEIST), this 31-foot carbon-composite wing section held 18 propeller motors powered by lithium iron phosphate batteries. Rather than incur the significant costs of testing the HEIST in a wind tunnel, the research team mounted it onto a specially modified truck that was driven across a dry lakebed at Edwards Air Force Base at 70 miles per hour, simulating takeoff speeds. The HEIST was attached to load cells on a supporting truss to dampen the effects of the road.

The ground tests provided valuable data and furthered risk reduction, positively contributing to future flight research. Specifically, the ground tests were an important step toward development of a small X-plane demonstrator. The X-plane will involve replacing a Tecnam P2006T’s wings and engines with LEAPTech, allowing engineers to easily compare its performance against that of the original aircraft.

The LEAPTech distributed-propeller approach to electric aviation will increase efficiency 500 percent, reduce costs 30 percent, dramatically reduce aircraft noise, and produce zero emissions. It also is expected to improve the performance and ride quality of electric-propulsion aircraft. In addition, the commercial potential for this technology is significant, since approximately half of passenger air travel is short range—known as the thin-haul market—for which electric propulsion is ideal. Within a few years, such aircraft could be retrofitted to incorporate the LEAPTech propulsion system, achieving significant environment and economic benefits.