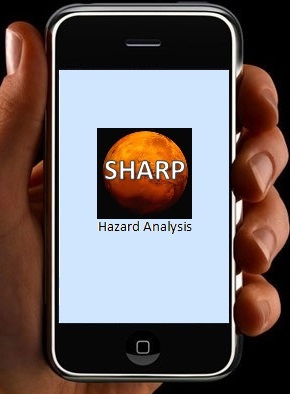 Since the crew will be so far away when exploring Mars, it is not going to always be practical for Mission Control to do as many things for them, and one thing they will likely need is a remote capability to perform hazard analysis. Since the crew will have to improvise their own procedures more frequently, being able to assign hazard controls and verifications will become increasingly important for them.

To address this issue I’m proposing  the development of an app that aids the crew to perform simplified hazard analysis. The crew would answers some questions and the app would inform the crew of the hazards that would likely be of concern and would propose basic controls and verifications that should be considered.The crew could then implement hazard controls with greater independent and reduce their exposure to risk.

SHARP will be developed in two stages. First, a mapping of the logic to drive the app will be documented. This logic map will develop the questions that will be asked of the crew and the answers that will be returned to them. The focus will be on making the tool user friendly while providing useful control strategies for a broad range of hazardous conditions. Second, a prototype app will be developed to act as a testbed for the user interface and prove out the usefulness of the logic map. Finally, at a later time, a reporting function will be incorporated.

SHARP will have two product deliverables. The first will be the logic map, which traces a series of questions to a group of answers the inform the crew about the hazards they are likely to encounter in their chosen task, and what controls and verifications they should attempt to implement to mitigate the risk. The second would be a prototype app, which would be the user interface and testbed of the logic map. The app would, with further development, become the end product for the crew.

This ICA submission is to take the idea from practical idea (TRL 2) to the prototype phase (TRL 3). The next steps would be to apply for further ICA and other innovation related funding to further refine the useability and the usefulness of the answers provided by the app (TRL 4 & 5). Beyond that, conversations with the S&MA directorate, the Orion Program, and with other potential stakeholders would take place to initiate a development project once its potential usefulness becomes evident.

Just as SHARP helps with Orion's trips to Mars, it can be used for any mission in which the crew needs extra autonomy from earth. SHARP's purpose is to improve the safety and reduce the risk of the crew's when they perform improvised or otherwise unpreplanned activities.

The ability to perform hazard analysis is essential to improving the safety and security of any human activity that involves signficant risk. Currently, most organizations centralize their ability to conduct hazard analysis (usually a safety and reliability group) and simply distribute the results to the users. This tool allows the end user to perform simplified hazard analysis and take action to reduce their risk when access to the centralized safety organization is unavailable or sufficiently hindered. As commercial organizations venture deeper into space, or as they experiment with granting their crew's greater autonomy, increasing their crew's ability to assess hazards and plan accordingly will become a critical feature to mission success. This tool is one approach to improving crew's abilities to identify hazards and implement appropriate controls.