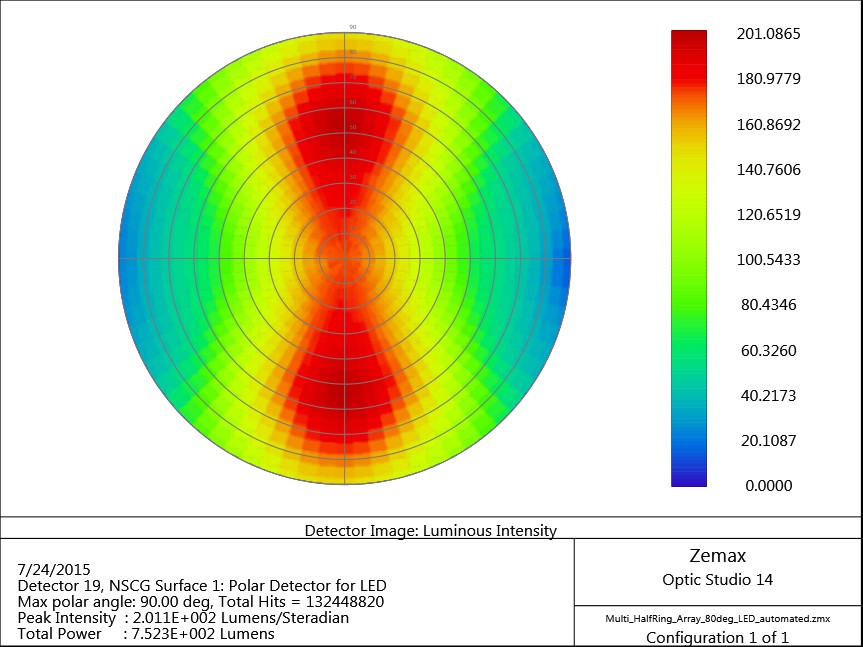 This proposal is for the development of a computational model of a prototype variable beam light source using optical modeling software, Zemax OpticStudio ®. The variable beam light source will be designed to generate flood, spot, and directional beam patterns, while maintaining the same average power usage.  The optical model will demonstrate the possibility of such a light source and its ability to address several issues:  commonality of design, human task variability, and light source design process improvements.  An adaptive lighting solution that utilizes the same electronics footprint and power constraints while addressing variability of lighting needed for the range of exploration tasks can save costs and allow the development of common avionics for lighting controls.

One of the risks of a multi-system approach to reaching Mars is the cost added due to unique designs driven by the use cases of each operational platform.  The risk in developing a lighting solution for one platform, is that its design may not fully address the variability of tasks for other platforms, and due to vehicle time development scale, may become obsolete by the time the last vehicle component is developed.   Because of the rigorous and expensive certification process for electronic hardware, it would be wise to develop lighting system components and control technologies that are modular and adaptive to a wide range of internal and external vehicle tasks.  The introduction of the concept of computer based modeling of light sources prior to fabrication is a process improvement for spacecraft lighting design and its demonstration can show cost savings potential for the development of future lighting systems.

This project will use the lighting and optical modeling software, Zemax OpticStudio ® Premium, to build a model of an LED array.  Zemax is a forward ray tracer that can model light source beam distribution, light source spectral wavelength, and material reflectance / transmittance properties.  It can predict final beam distribution based on the designed optical system.  Each LED in the array developed will represent currently manufactured LEDs intended for white light illumination.  The light output of the LEDs will be controlled individually, while maintaining the same total flux output.  The goal is to develop beam pattern distributions, from the same source that represent flood, spot, and directional lighting while consuming approximately the same power.

The deliverable will be a Zemax computational lighting model that can be interpreted, as a future project, into an end item specification for a variable beam light source.  The computation model will show the type and number of LEDs, LED spacing, intensity of the LEDs used to generate each beam pattern, and constraints on diffuser optics.   In addition to the computational model, Illumination Engineering Society (IES) beam pattern files for each beam type will be published.   Beam pattern data will be interpreted for potential application in an installation as it relates to human task performance.

This project can provide a demonstration of how to reduce risk in development of engineered lighting systems for operations and habitats.  Developing optical models before a light source is fabricated can be an immediate benefit to Orion and ISS for optimization of standards and end item specifications.  It especially can be beneficial to projects that pose increased risk to the crew because of unknown or unpredictable operational lighting conditions.  It can also help NASA increase the operational capability of spacecraft lighting systems while reducing the number of different types of lights that are needed to accommodate the wide range of interior and exterior operational tasks.  The project will also demonstrate the advantage of modeling a light source before requirements are developed to increase the chances that lighting requirements will produce the intended product.

This project can benefit Human Spaceflight exploration and the Evolvable Mars Campaign by demonstrating the ability of a "one light source does it all" approach.  If NASA is able to develop a modular, smart, adaptable lighting technology, the same comprehensive system can be installed throughout NASA exploration spacecraft.   NASA can approach spacecraft architecture discussions from the perspective that the technology to make a lighting system fully adaptable to the needs of the crew is a standard solution with an approved standard system of parts and lighting system controls.  By standardizing to a highly adaptable system, NASA can minimize fabrication of many different solutions (individual model numbers) and lighting control algorithms.  Training and operations of spacecraft lighting can be standardized.   Lifecycle costs and sparing can be simplified.  By creating a flexible automated system that provides the range of lighting needed for tasks, NASA can also control the power budget for crewed tasks.

Adaptable lighting systems are a benefit to the commercial spaceflight industry servicing human spaceflight agendas.  Commercial vendors can offer their passengers innovative lighting solutions that anticipate the variety of task lighting needs.  Commercial vendors can also realize savings in weight and power usage by implementing a system that puts the light exactly where it needs to be while minimizing wasted energy.

This technology can benefit multiple Federal agencies and consumer markets.  The FAA will potentially benefit by developing smart aircraft and airfield lighting systems.  Society of Automotive Engineers (SAE) (automotive headlamp design) will benefit by making light sources for car headlamps that meet highway safety constraints but can dynamically adapt spot and flood to reduce glare related highway accidents.  National Transportation Safety Board (NTSB) is benefited by incorporation of dynamic roadway lighting that adjusts beam patterns for the current highway traffic.  Department of Energy (DOE) is benefited by introduction of smart, adaptable, modular lighting that can be implemented by commercial, institutional, and lighting utilities to reduce the U.S. energy footprint.