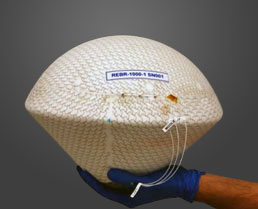 In order to increase thermal protection capabilities for future reentry vehicles, a method to obtain relevant test data is required.  Although arcjet testing can be used to obtain some data on materials, the best method to obtain these data is to actually expose them to an atmospheric reentry.  The over-prediction of the Orion EFT-1 flight data is an example of how the ground test to flight traceability is not fully understood.  The RED-Data small reentry capsule developed by Terminal Velocity Aerospace is critical to understanding this traceability.  In order to begin to utilize this technology, ES3 needs to be ready to build and integrate heat shields onto the RED-Data vehicle.  Using a heritage Shuttle tile material for the heatshield will both allow valuable insight into the environment that the RED-Data vehicle can provide and give ES3 the knowledge and capability to build and integrate future heat shields for this vehicle.

Due to the extreme cost associated with traditional flight tests, NASA has relied almost exclusively on ground based arcjet test facilities in order to develop thermal protection system materials.  It is known that the reliance on these facilities has likely resulted in over-designed TPS systems due to the significant  environmental differences between ground and flight.  Now with the ability to use lower cost devices, such as the RED-Data entry vehicle, the ability to perform actual flight testing on thermal protection system materials may be feasible.  This type of data would in turn give a better understanding of how the material behaves during an actual entry and may in turn help with mass issues that would be encountered in flights beyond low Earth orbit.

Investigation will be performed on the thermal protection test bed pathfinder by the in-house fabrication of a heat shield from heritage Shuttle tile material that will be designed to be installed on the RED-Data entry vehicle.  JSC will obtain the heat shield tile material from the thermal protection processing facility at KSC.  Once the tiles are obtained they will be installed by engineers on the RED-Data structure in the thermal protection system lab at JSC.  The techniques that are developed from building and integrating this heatshield will allow a process to be developed to build future heat shields out of materials that are being proposed for other reentry vehicles such as Avcoat for Orion.

The final product deliverable from the thermal protection test bed pathfinder would be a completed heatshield fabricated from heritage Shuttle tile material.  The heat shield then would be installed on a RED-Data small reentry capsule and be prepared for its first flight.  The heat shield will include instrumentation that will be used to gain a better understanding of the environment that RED-Data experiences during entry.  In addition, a process will be developed on how to build and integrate future heatshields on RED-Data by ES3 engineers.

Once the thermal protection test bed pathfinder is completed it will be flown into low Earth orbit.  The data that are obtained from entry from this pathfinder flight will be utilized to continue development of ablative heatshield materials that are being proposed for other reentry vehicles including the Orion Multi Purpose Crew Vehicle.  This pathfinder project will also demonstrate the capability of JSC ES3 engineers to build and install heatshields on small entry vehicles such as the RED-data vehicle.

This project could potentially benefit current entry vehicles such as Orion or the Commercial Crew Program by allowing a test bed that could be used in place of arc jet testing of thermal protection materials.

This project could benefit the Evolvable Mars Campaign as this test bed could be used for development of a heat shield for a Mars Entry vehicle.

This project could benefit the commerical space industry by showing that this vehicle could be used for testing of thermal protection materials instead of arc jet testing.