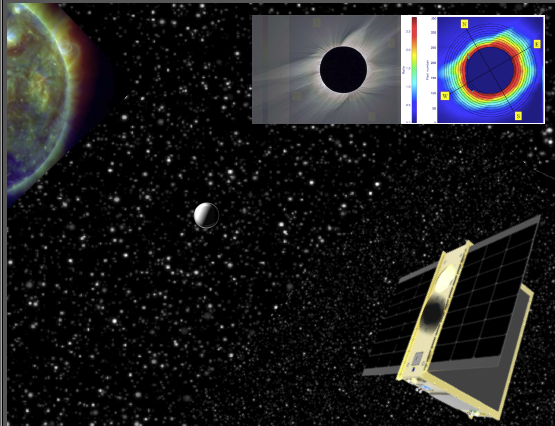 Objective #1: Quantify, both analytically and experimentally, the diffraction intensity around a spherical object as a function of distance. Two different diameter/distances will be used to determine a non-linear relationship between the diffraction intensity and occulter diameter/distance and see how these experimental results compare to theoretical ones. Also studied will be the effects of a conducting surface (metal) vs non-conductive (black paint or carbon nanotube). Each type of occulter will be place at different distances, including the ~2 m baseline for the FFBBC CubeSat design, in order to produce a curve that can be extrapolated to the hundreds of meters distance of the FFBBC Explorer version.

Objective #2: Determine if diffraction around a sphere can be used as signal for inertial pointing.  The FFBBC occulter will also occult, at least partially, any spacecraft fine Sun sensor for long separations. The diffraction around a sphere also produces a bright, concentrated spot at the center of the spherical diffraction pattern and shadow referred to as Poisson’s or Arago’s Spot.  The second goal, to be achieved using the same measurements addressing Objective #1, is to measure the brightness and extent of this spot to see if it can be used to drive the guidance algorithm for inertial formation flying.  This means the science CCD can double as the fine Sun-sensor, again reducing multiple systems simplifying the mission design.