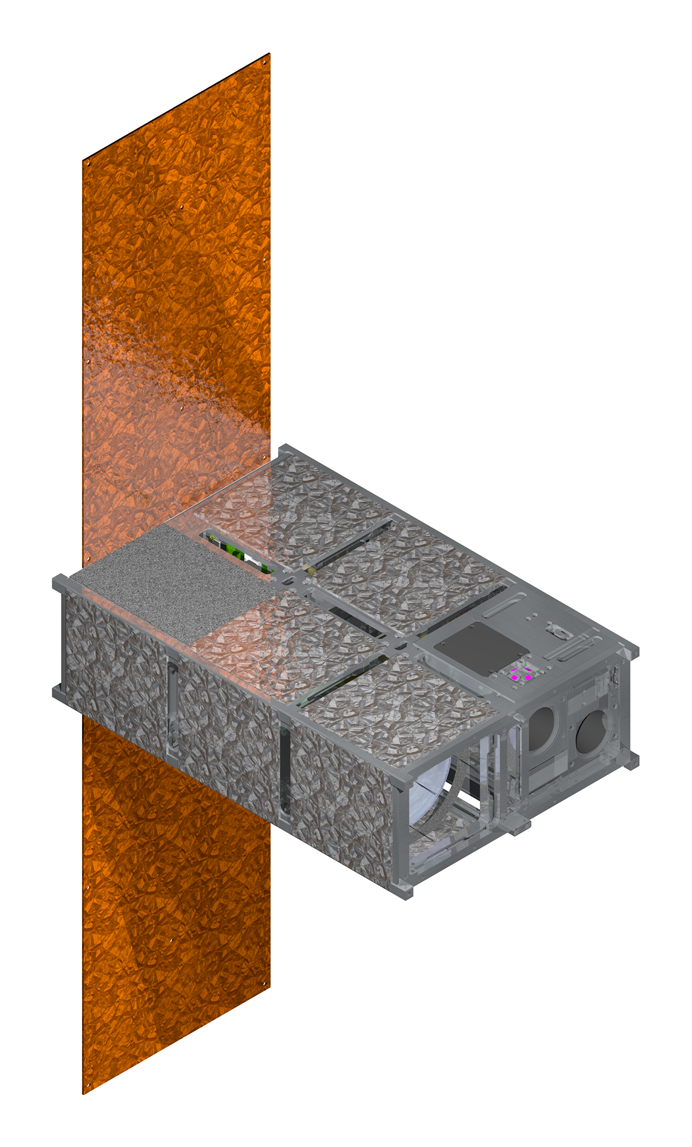 We are developing a mission concept for a CubeSat-based synoptic imaging survey to explore the ultraviolet sky for several key discoveries in time-domain astrophysics. The IRAD investigation will mature a sensitive, wide-field instrument design optimized to produce new and unique observations of transient astrophysical events (supernova shock breakout, gamma-ray bursts, tidal disruption events, and variable stars and quasars). With this design concept in hand, the CUTIE CubeSat mission will be ready to begin development should it be approved for funding.

Our primary objective is the design of a science instrument – in this case, a wide field-of-view ultraviolet camera – with the largest possible aperture for a CubeSat payload. We intend to incorporate new techniques such as 3D printing of lightweight structures, combined with commercial CCDs and Goddard’s unique expertise in the development of high performance compact science instruments in the ultraviolet.

CUTIE’s science case is based on several transient phenomena that are best, and in some cases only, observable in the ultraviolet from space. One such example is the early shock breakout from supernovae. This signal, coming in the UV when radiation from the expanding shockwave first escapes from the stellar envelope, directly encodes the radius of the progenitor star – information that is lost at later times and at longer wavelengths.    CUTIE should find one such supernova every day during operation.

This innovative transient monitoring strategy relies on a very wide field of view with high efficiency ultraviolet optics. The étendue of this CubeSat instrument is 30 times greater than that of GALEX, the last UV Explorer mission, yet can be done with a small, low-cost design. This permits roughly 10% of the sky to be patrolled repeatedly for time-variable sources at high sensitivity. The novelty of such capability with such modest project scope will make for a compelling CubeSat proposal.

We intend to mature the science payload through four parallel paths, all equally important. One thrust will be to produce a capable optical design, crucial to being able to realize the science promise of the mission. A second will be to develop a telescope structure suitable for a CubeSat in a lightweight format. The third consists of the design of a low-power, low-noise CCD controller to provide high sensitivity imaging. The fourth task is to develop a detailed science simulation framework that can be used to predict the performance of CUTIE for all its science cases as a function of the instrument design and operational plan.

The CUTIE concept is for a 6U payload, which can accommodate a telescope of roughly 9cm diameter. With baffling, it will consume around 2U, while the CCD chip and readout electronics will fit in the 1U behind the optics. An additional 3U for the spacecraft components, particularly for power and attitude determination/control, are fully used. All the spacecraft components and the 6U structure are commercially available, CubeSat-specific designs. A mechanical prototype of such a structure with a representative telescope has been produced by the company ISIS (figure at above right). It features a skeletonized structure with multiple mounting points, space for standard CubeSat electronics, and full bay space for larger systems such as an attitude determination/control system.

These four design elements enabled the CUTIE CubeSat mission concept to be proposed in March 2015 to ROSES/APRA, for a single flight design and build (total cost a few $M). In the future, multiple copies of CUTIE can be funded as an Explorer Mission of Opportunity, with the swarm of CubeSats enabling improved sky coverage, sensitivity, and/or cadence of the time-domain monitoring of transient sources.

This is the development of a CubeSat mission concept, CUTIE.  This mission is dependent on the successful completion of this concept development work.