Spacecraft/Rover Hybrids for the Exploration of Small Solar System Bodies 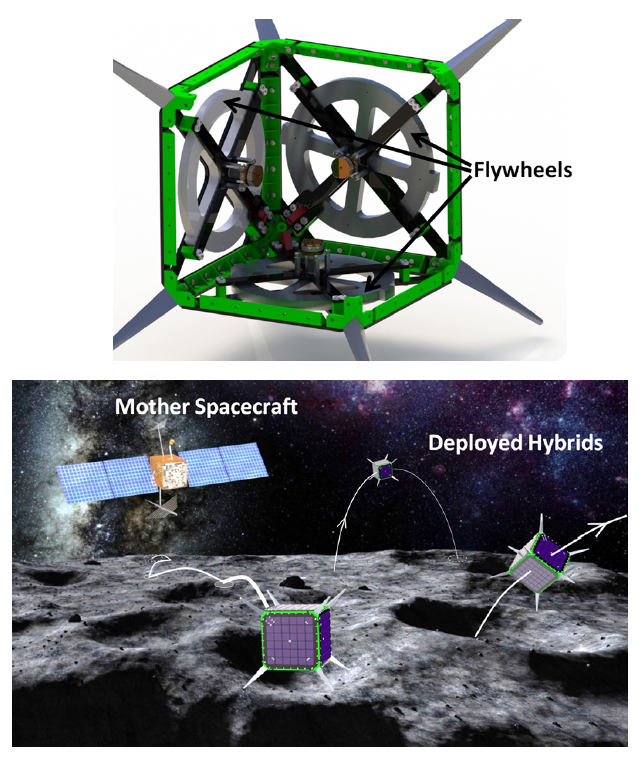 The goal of this effort is to develop a mission architecture that allows the systematic and affordable in-situ exploration of small Solar System bodies, such as asteroids, comets, and Martian moons. Our architecture relies on the novel concept of spacecraft/rover hybrids, which are surface mobility platforms capable of achieving large surface coverage (by attitude-controlled hops, akin to spacecraft flight), fine mobility (by tumbling), and coarse instrument pointing (by changing orientation relative to the ground) in the low-gravity environments (micro-g to milli-g) of small bodies. The actuation of the hybrids relies on spinning three internal flywheels, which allows all subsystems to be packaged in one sealed enclosure and enables the platforms to be minimalistic, thereby reducing the cost of the mission architecture. The hybrids would be deployed from a mother spacecraft, which would then act as a communication relay to Earth and would aid the in-situ assets with tasks such as localization and navigation. In Phase I, we demonstrated that the bounding assumptions behind our proposed mission architecture are reasonable, and have a sound scientific and engineering basis. Phase II has two objectives. First, to advance from TRL 2 to TRL 3.5 the mobility subsystem of the hybrids (comprising planning/control and localization/navigation), with the aid of a unique test bed for low-gravity surface mobility and parabolic flight tests on a zero-g airplane. Second, to study at a conceptual level (TRL 2) system engineering aspects for the hybrids, with a focus on power, in the context of a mission to Mars' moon Phobos. Collectively, our study aims to demonstrate that exploration via controlled mobility in low-gravity environments is technically possible, economically feasible, and would enable a focused, yet compelling set of science objectives aligned with NASA's interests in science and human exploration. Indeed, while controlled mobility in low-gravity environments was identified by the National Research Council in 2012 as one of NASA's high priorities for technology development, it has never been demonstrated in a high-fidelity low-gravity test bed. Hence, this proposal, if successful, would provide a sought-after and currently unavailable capability for small bodies exploration.

This report describes a novel mission architecture for the systematic and affordable insitu exploration of small Solar System bodies.

September 2011: Project Start
September 2012: Closed out More » Less «
Closeout Summary: In this effort we investigated a novel mission architecture for the systematic and affordable in-situ exploration of small Solar System bodies. Such a mission architecture stems from a paradigm-shifting approach whereby small bodies' low gravity is directly exploited in the design process, rather than being faced as a constraint. We demonstrated that the bounding assumptions behind our proposed mission architecture are reasonable, with a sound scientific and engineering basis. A future study should focus on the key feasibility and maturation aspects identified during Phase I, in particular, hybrids' fine mobility on irregular terrains, life-expanding power subsystems, and synergistic mission operations.

Show
Mars, Others Inside the Solar System