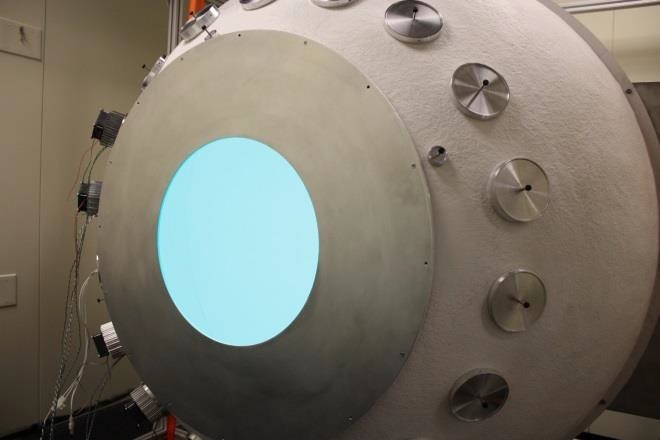 Planetary and Earth imaging requires radiometrically calibrated and stable imaging sensors.  Radiometric calibration enables the ability to remove or mitigate sensor-specific and environmental anomalies from the data and to convert a sensor’s output to common engineering units (e.g. radiance or reflectance).  Additionally, radiometric calibration provides the means to compare image sets acquired by multiple sensors at different times and geometries.

Sensor radiometric calibration and stability is typically accomplished by initially calibrating an imaging sensor in a laboratory before it is fielded or integrated onto a spacecraft and launched. National Institute of Standards and Technology (NIST) traceable integrating sphere based radiometric calibration sources have been the laboratory work horse technology for several decades.  However, with a few exceptions, many calibration systems are from vendors that sell designs and technology similar to those that were introduced into the market a decade or more ago even though advances in digital imagers and spectroscopic systems would benefit from several improvements.  In addition, the push for higher spatial resolution imagery is causing scaling issues with traditional designs.

A systems engineering approach was used to develop an advanced calibration source for imaging systems.  To accomplish this, a novel large integrating sphere, made from a fiberglass shell instead of a traditional aluminum shell, along with electronically adjustable high power LED light sources capable of producing a computer controlled uniform light source, was developed.  The resulting LED illuminated integrating sphere can be used to calibrate large optical systems over a large range of radiance levels.

NIST traceable integrating sphere based radiometric calibration sources have been used for several decades. An integrating sphere source is a spherical shell coated with highly reflective diffuse material that is illuminated either internally or externally.  These spheres have ports that allow light to enter or exit. Sometimes the integrating sphere source will have a detector or spectrometer to monitor its output. An observatory class calibrator (~1.2-1.5 m in diameter) can radiometrically calibrate imaging systems over the 360-2500 nm (UV-SWIR) spectral range by incorporating tungsten lamps into the design.  In this project, LEDs were combined with tungsten lamps to produce a UV-SWIR source.  Operating the tungsten lamp at temperatures lower than their normal limits extends their lifetime while only slightly reducing their SWIR output.  Since operating at lower temperatures also lowers illumination in the UV and visible spectrum, LEDs were used to fill in that part of the spectrum.  In this way, the light source was made stable for better than a few percent for 1000 hours or more as compared to the typical 50 hours for traditional light sources.  This feature improved the robustness of the calibration source and potentially reduces future maintenance costs.

Benefits would be to the NASA funded Earth Science mission which includes the NASA’s Earth Observing System (EOS).  NASA’s EOS is a coordinated series of polar-orbiting and low inclination satellites for long-term global observations of the land surface, biosphere, solid Earth, atmosphere, and oceans.  This technology would be used as an advanced calibration source.  Additionally, other NASA field centers involved with small satellites such as Ames Research Center, would benefit from this advanced calibration source.

Benefits to the commercial space industry would similar to those that would benefit NASA, and could include numerous commercial imaging industries like Hexagon (who own Leica Geosystems and Z/I Imaging) for using this type of technology for calibrating their cameras that are located in North America.  For these types of companies, reducing the time it takes to perform an absolute radiometric calibration on their cameras would minimize instrument down time. Current alternative approaches take much longer due to logistics and methods used.

Currently there over 50 satellites with Landsat-like bands imaging the earth with moderate to large telescopes that would benefit from using this technology.

Benefits to other government agencies would be similar to those that would benefit NASA.  Other government agencies operate and maintain planetary and earth observing imaging systems that require advanced calibration sources.  For example, this technology is potentially beneficial to the National Oceanic and Atmospheric Administration (NOAA) in their aid in providing a calibration or benchmark for concurrent ozone-monitoring instruments.  In addition, NOAA satellites also monitor stratospheric ozone and provide data for weather forecasts which also require calibration.