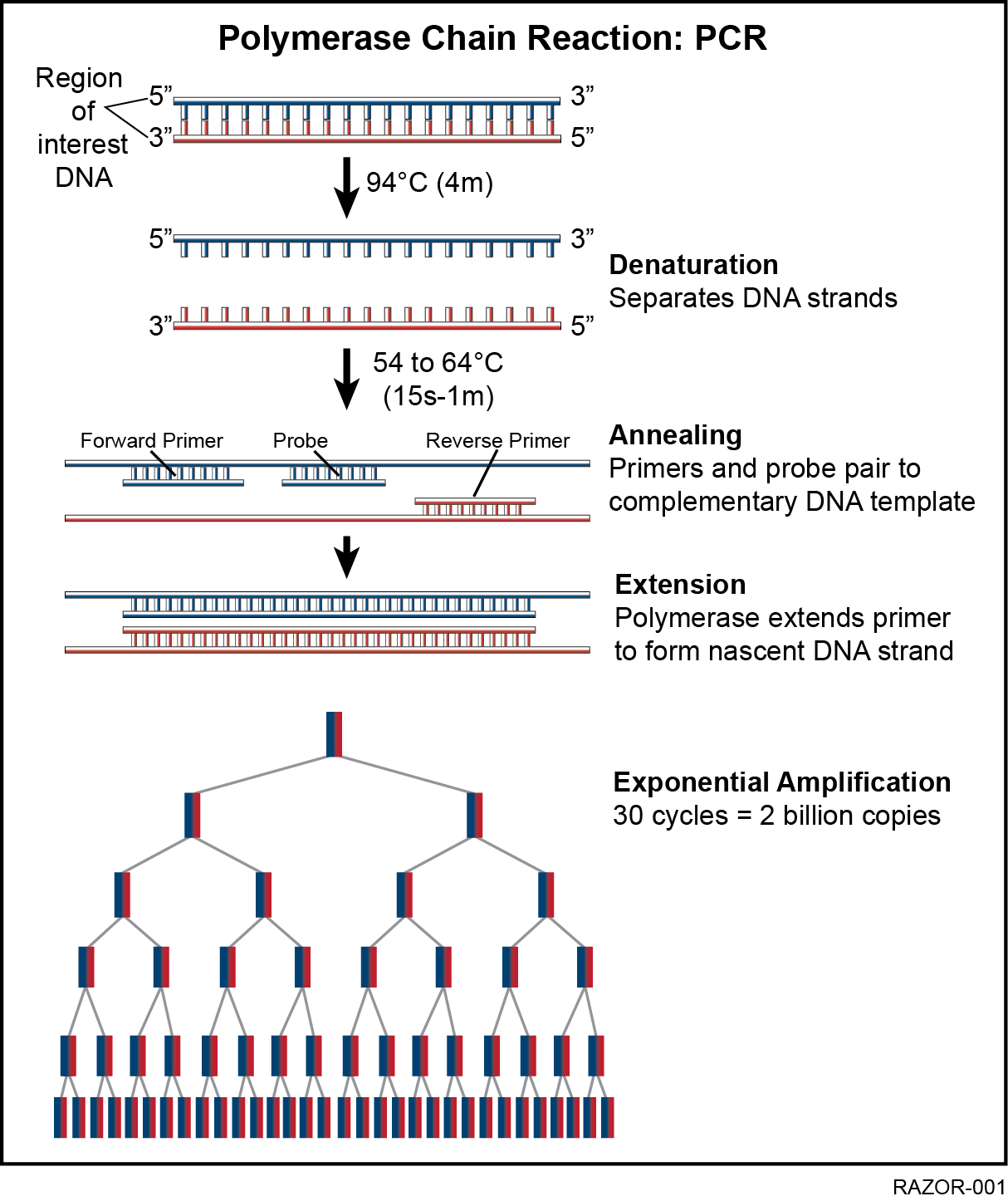 Previous research has shown that potential human pathogens have been detected on the International Space Station (ISS).  New microorganisms are introduced with every exchange of crew and cargo.  Microorganisms introduced to the ISS are readily transferred between crew and subsystems (i.e., ECLSS, environmental control and life support systems).  Current microbial characterization methods require a culture-based enrichment of microorganisms and at least a 48-hour incubation time. This increases the microbial load while detecting only a limited number of microorganisms. The culture-based method detects approximately 1-10% of the total organisms present and provides no identification. To identify and enumerate ISS samples requires that the microbes be returned to Earth for complete analysis. Therefore, a more expedient, low-cost, in-flight method of microbial detection, identification, and enumeration is needed. The RAZOR EX, a ruggedized, commercial off the shelf, real-time PCR field instrument was tested for its ability to detect microorganisms at low concentrations within one hour. Escherichia coli, Salmonella enterica Typhimurium, and Pseudomonas aeruginosa were detected at low levels using real-time DNA amplification. Total heterotrophic counts could also be detected using a 16S gene marker that can identify up to 98% of all bacteria. To reflect viable cells found in the samples, RNA was also detectable using a modified, single-step reverse transcription reaction.

Previous research has shown that potential human pathogens have been detected on the International Space Station (ISS). New microorganisms are introduced with every exchange of crew and cargo making it necessary to monitor the water, air, and surfaces to identify microbial contamination and prevent adverse effects on crew health and environmental control systems (Pierson et al., 2012).  Microorganisms introduced to the ISS are readily transferred between crew and subsystems (i.e., ECLSS, environmental control and life support systems). Current microbial characterization methods are time consuming, requiring enrichment of microorganisms thereby increasing the microbial load. This method can detect only a limited number of microorganisms and therefore is an incomplete picture. To identify and enumerate ISS samples requires that samples to be returned to Earth for complete analysis. Neither route would be feasible for long duration space flight especially beyond low Earth orbit. Therefore, a more expedient, low-cost, in-flight method of microbial detection, identification, and enumeration is warranted.

Many subsystems on the ISS have been negatively impacted by microbial biofouling. In 2011, microbiologists and other subject matter specialists recommended implementing molecular-based technologies, such as real-time quantitative polymerase chain reaction (qPCR), to evaluate if qPCR could replace current culture-based technologies. The following year, in 2012, the NASA Space Technology Mission Directorate Game Changing Technology Program initiated a project to identify current platforms capable of microbial monitoring in microgravity. Platforms capable of polymerase chain reaction (PCR) were selected and evaluated. PCR is a method designed to take a small amount of genetic material (DNA) from cells and amplify it using optimized PCR reagents. Within a short period of time, one copy of the cellular DNA is amplified to billions of copies without the need to cultivate the microorganisms (Figure 1). If successful, it would provide a fast, reliable monitoring technology, enabling operational decisions for the ISS and for future long-duration spaceflight missions.

The goal of this study was to describe and test the capabilities of a potential microbial monitoring system that will identify and provide relative abundance information for commonly recovered microorganisms previously sampled aboard the ISS. The RAZOR EX® (Biofire Defense, Inc, Salt Lake City, UT) is a compact, lightweight, ruggedized, automated, rapid, PCR instrument capable of providing rapid microbial identification and relative enumeration. Designed to readily detect microorganisms on the battlefield, the instrument is easily operated by untrained crew members and can provide real-time data for air, water, surface, and biomedical samples (Figure 2).

Additional goals included the development and testing of species-specific assays for detection of target organisms; testing to confirm the lowest level of detection for the RAZOR polymerase chain reaction instrument for targeted organisms; and determining the effects of media, solutions and complex matrices on the detection of microorganisms. Assays were also tested to determine if communities of microorganisms would interfere with the detection of each individual type of microorganism through competition, and whether total heterotrophic counts of microorganisms could be performed to provide cellular enumeration data. Ultimately, these combined data would be presented to down-select a COTS platform suitable for microbial monitoring aboard ISS. Once the above goals were completed, the RAZOR was then applied to additional programs (i.e., Food Safety) to assess its functionality.

An in-flight microbial monitoring instrument such as the RAZOR EX would enable efficient and rapid assessment of the microbial environment of the ISS, including environmental control and life support system hardware, and lead to expedited operational decisions beneficial to crew health and equipment operation.