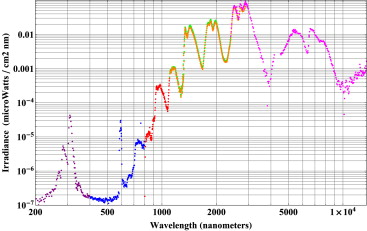 The detection of hydrogen fires is important to the aerospace community. The National Aeronautics and Space Administration (NASA) has devoted significant effort to the development, testing, and installation of hydrogen fire detectors based on ultraviolet, near-infrared, mid-infrared, and/or far-infrared flame emission bands. Yet, there is no intensity calibrated hydrogen-air flame spectrum over this range in the literature and consequently, it can be difficult to compare the merits of different radiation-based hydrogen fire detectors.

This one year effort had four aspects; complete and document the calibrated spectral intensity of a hydrogen flame, understand the role of atmospheric attenuation on the performance of hydrogen flame detectors, help qualify the performance of the near infrared water measurement instrument used in the NASA Regolith and Environment Science and Oxygen and Lunar Volatile Extraction (RESOLVE) project, and build a prototype next-generation ultraviolet hydrogen flame simulator.

All missions that require a hydrogen fueled launch will benefit from this work. Having a better understanding of the emission spectrum of a hydrogen flame allows better design and evaluation of hydrogen flame detectors.  Also, having a modernized ultraviolet hydrogen flame simulator will aid in the certification of the flame detection system at the launch pad being used.