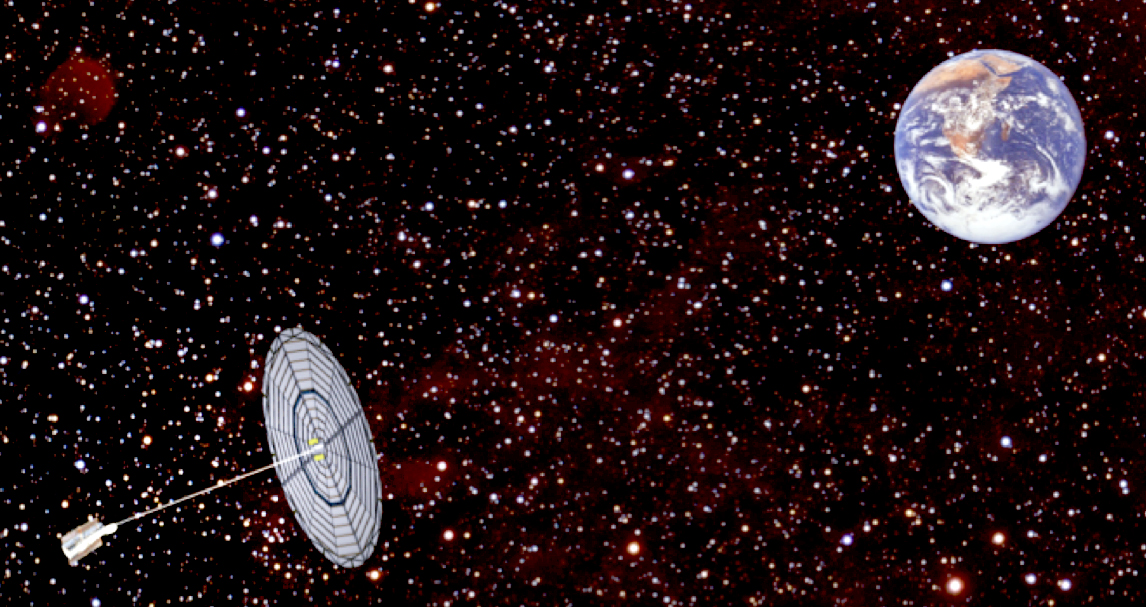 The diagram shows a conventional telescope pointed at an opaque disk along an axis to a distant target. Rather than block the view, the disk boosts the resolution of the system with no loss of collecting area. This architecture, dubbed the "Aragoscope" in honor of the scientist who first detected the diffracted waves, can be used to achieve the diffraction limit based on the size of the low cost disk, rather than the high cost telescope mirror. One can envision affordable telescopes that could provide 7cm resolution of the ground from geosynchronous orbit or images of the sky with one thousand times the resolution of the Hubble Space Telescope.

The Aragoscope is a concept for building giant telescopes in space in a practical and affordable manner. They can be used to view outward into space to perform astronomy with unprecedented resolution - hundreds or even thousands of times finer than the Hubble Space Telescope. Or, they can be used to look down at the Earth with unprecedented clarity from the high stable perch afforded by Geosynchronous Orbit.

July 2014: Project Start
June 2015: Closed out More » Less «
Closeout Summary: When we started writing this document we had envisioned it as a final report on our Phase I efforts. But as the document came together we realized that there were important areas of study that were incomplete. We did not feel comfortable with the level of quantitative analysis that had been completed, and as a result, the direction an optimal design should take was too undefined. So we decided that the best course of action was to delay the submission of the Final Report until next year. We have used the additional time to come to terms with the practicality of the Aragoscope. While it is clear that the Aragoscope has great potential, there were a variety of solutions to the collecting area problem and no one of them stood out as obvious. So we have looked, instead, at the most likely architecture that could be implemented by NASA in the foreseeable future. And that means Starshades. Starshades are now, ten years after the end of their NIAC study, becoming the odds-on favorite for the next exoplanet mission. A starshade involved a large diffractive optic that can formation fly with a telescope. As such, converting a starshade to a high resolution imager is the most likely path to an Aragoscope. One could easily envision apertures in the starshade that could be opened when imaging mode was desired. A full ring on a 50m diameter starshade would give resolution of two milliarcseconds, which is fifty times better than Hubble. A single ring could give 6cm2 of effective area and a 100x100 resolution element image in a 2.4m telescope like WFIRST. This would allow unique new images on bright targets. But, of course, one would like more collecting area. This can be achieved by opening multiple rings on different Fresnel zones. This would cause some chromatic diffraction rings, but those can be handled in the data analysis. Since the collecting area would rise as the number of rings squared, even a dozen rings could put one in reach of fainter and more interesting targets. In summary, we feel a study of a limited Aragoscope on a starshade to improve the return of the mission is worth a study. At this time we expect to propose such an architecture study for Phase II at the next opportunity