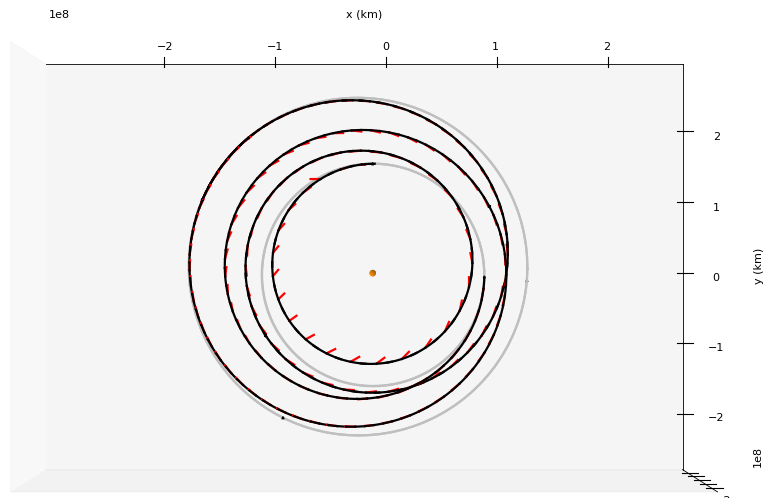 The Evolutionary Mission Trajectory Generator (EMTG) is a global trajectory optimization tool. EMTG is intended for use in designing interplanetary missions which perform multiple planetary flybys and either low-thrust or high-thrust propulsive maneuvers on the way to destinations in the solar system. EMTG is designed to work with minimal user oversight. The user must input only the starting location, the destination, the allowable range of launch dates, the allowable flight time, and minimal information about the spacecraft hardware (launch vehicle, propulsion, power). EMTG then autonomously searches for the optimal sequence of planetary flybys and propulsive maneuvers which delivers the most payload to the destination. EMTG is easy to use and capable of designing a wide variety of missions. This report focuses on the development of EMTG's low-thrust mission design capabilities.

The problem to be solved here is that of designing complex interplanetary trajectories to destinations which are difficult to reach via direct flights and chemical propulsion. Some targets, such as Mars and Venus, are reachable using direct flights with chemical propulsion technology. Others, such as the Mercury, the outer planets, main-belt asteroids, comets, and many other scientifically interesting targets are not easily accessible, i.e. the Δv required to reach them via direct chemical flights is too high and therefore payloads of useful size cannot be easily delivered. There are two ways to mitigate this problem. One is by using more efficient propulsion systems, such as low-thrust solar electric propulsion (SEP). The other is to find more efficient paths to the destination, possibly including gravity assist maneuvers, also known as planetary flybys. Even better solutions might be found by combining these techniques. Unfortunately these trajectory optimization problems are very difficult to solve. The multiple-flyby interplanetary trajectory optimization problem is characterized by having a highly nonlinear objective function, several nonlinear constraints to enforce feasibility (i.e. preventing the spacecraft from coming dangerously close to a planet) and many locally optimal solutions. The large number of locally optimal solutions makes finding the global optimum very difficult. The low-thrust trajectory optimization problem is characterized by a very large number of nonlinear decision variables and constraints. Problems which involve both planetary flybys and low-thrust propulsion suffer combine the two sets of challenges – they have many locally optimal solutions and also many (hundreds to thousands) of decision variables and many (tens to hundreds) of nonlinear constraints. There are several methods that have been previously used to solve this type of problem. The most successful of these has been to search for combinations of planetary flybys using a grid search method or intuition and a highly simplified trajectory model, as in the case of Jet Propulsion Lab’s STOUR and STOUR-LTGA. A higher fidelity tool such as MALTO, GMAT, or Copernicus is then used to refine the solution. The main problem with traditional design techniques is the risk of never considering the combination of choices that produces the optimal solution. When one uses a low-fidelity grid search, it is possible that the globally optimal solution will not be captured in the grid. In turn the higher-fidelity local optimization tools like MALTO, GMAT, and Copernicus will only converge to a locally optimal solution in the neighborhood of the user-supplied initial guess. None of the existing methods allow for fully autonomous global optimization of missions that include flybys, low-thrust propulsion, or combinations of the two.

Any entity wishing to design low-thrust missions may find this tool useful. However its primary utility is in designing interplanetary missions, so NASA is the most likely user.