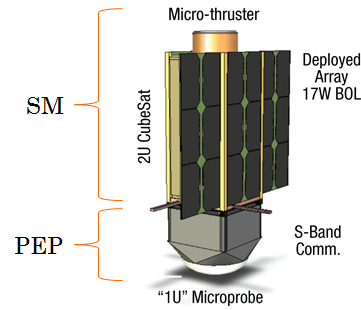 The Cubesat Application for Planetary Entry Missions (CAPE) concept describes a high-performing Cubesat system which includes a propulsion module and miniaturized technologies capable of surviving atmospheric entry heating, while reliably transmitting scientific and engineering data. The Micro Return Capsule (MIRCA) is CAPE’s first Planetary Entry Probe (PEP) flight prototype. Within this context, this project continues to develop the CAPE concept, and as part of the technology pathway, will carry out a balloon drop test flight experiment of MIRCA to verify deployment, flight software, communications, and aerodynamic parameters in a relevant environment.

So far, no microprobe (less than 10 kg) has entered another planetary atmosphere and successfully relayed data back to Earth. Although the Deep Space 2 Mars microprobes did reach their destination (total mass about 6.5 kg each), unfortunately they were lost due to a combination of delivery system failures and other unknown factors. This project expands on the concept of a planetary entry probe based on the widely popular Cubesat-class spacecraft specification (Cubesat Application for Planetary Entry Missions, or CAPE probes). Within a science operational context, CAPE probes may be sent from Earth to study a celestial body’s atmosphere, or to land/impact on some high-value target on its surface. Either one or multiple probes may be targeted to distributed locations throughout the geographic landscape and could be released systematically and methodically from an orbiting spacecraft. CAPE microprobes would each have its own propulsion, and hence would be capable of targeting regions identified by the mother ship as high-interest. This enables a completely new capability for science not possible with traditional “drop-and-flyby” schemes. To supplement its flexibility, each probe would incorporate a communications architecture that provides a high-level of assurance its precious data is acquired and transmitted back to Earth for analysis. CAPE consists of two main functional components: the “service module” (SM), and the “planetary entry probe” (PEP). The SM contains the subsystems necessary to support vehicle targeting (propulsion, ACS, computer, power) and the communications capability to relay data from the PEP probe to an orbiting “mother-ship”.   The PEP itself carries the scientific instrumentation capable of measuring atmospheric properties (such as density, temperature, composition), and embedded engineering sensors for Entry, Descent, and Landing (EDL) technology monitoring and assessment. The Micro Return Capsule (MIRCA) is the first engineering prototype of a PEP module.

Miniaturized components are necessary for many current NASA mission applications. Testing, mean-time-between-failures (MTBF), and failure modes and effects analysis of existing industrial-grade components are key activities that can factor into their utility for current aerospace applications.

CAPE probes can be included as secondary payloads in any NASA mission to planets and satellites with an atmosphere. Measurement of bulk properties and composition at multiple locations is essential for a comprehensive understanding of planetary atmospheres, especially if these in-situ measurements can be combined with remote sensing observations.

Testing, mean-time-between-failures (MTBF), and failure modes and effects analysis of existing industrial-grade components are key activities that can factor into their utility for current aerospace applications. This opens up the trade space of parts that have been originally designed for other industrial uses.