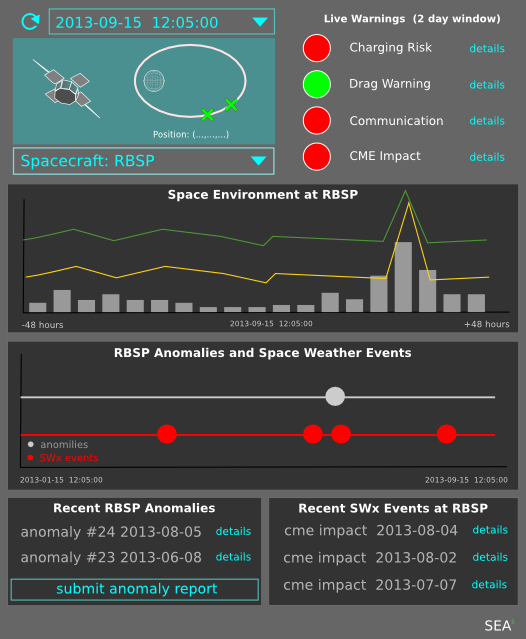 We propose to develop a comprehensive analysis and dissemination system (Space Environment Automated Alerts  & Anomaly Analysis Assistant: SEA5) that will provide past, present, and predicted space environment information for specific missions, orbits, and user-specified locations throughout the heliosphere, geospace, and on the ground.  The targeted outcome of this project is to build an extensible software system for NASA that provides an unprecedented capability for:

NASA has a strong program of exploration, technology development, and scientific research, in which satellite missions play a pivotal role.  The continued growth, success, and sustainability of the agency hinge on its ability to efficiently manage existing assets in space, as well as plan for future missions both manned and robotic.  With such substantial investments being made by the agency, significant space environment specification and forecasting capabilities are clearly needed to not only safeguard NASA’s current and future missions, but also maximize the scientific return of these missions. Existing space weather resources provide global and large-scale environmental information, but presently there are no highly-tailored services that target specific missions, specific orbits, or specific locations in space for any given time period.  This critical agency challenge is documented in a report commissioned by NASA’s Innovative Partnership Program entitled Space Weather Information System Requirements for NASA Robotic Missions, Pulkkinen (2010).

We will build a software system to assist NASA robotic missions operators that will allow users to select a specific spacecraft and/or orbit of interest, and be presented with an interface displaying space environmental conditions for the selected spacecraft, orbit, and time.  The system will also provide automated and customizable alert functionality, allowing users to define individual threshold and alert criteria, and be notified whenever events of interest are detected for any specific mission/orbit.  To help assist in spacecraft anomaly resolution, as well as mission planning and design, our system will also allow users to identify and flag specific time periods and locations. This will enable our system to build and archive a catalog of anomalous events that can later be utilized to identify space-weather-related spacecraft anomalies.  Figure 1 illustrates the SEA5 interface as it displays space environment and anomaly information tailored to the currently selected spacecraft.

Furthermore, SEA5 will illustrate a spacecraft’s proximity to boundaries separating regions with different environmental conditions, such as the Earth’s magnetopause and auroral boundaries.  Regions with enhanced space weather activity encompassing current or expected spacecraft locations will be clearly identified: for example, users could be informed of projected Coronal Mass Ejection paths or regions with enhanced ionospheric scintillation.  In practice, a user accessing the SEA5 interface would either select a specific mission from the catalog or input their own unique mission portfolio, subsequently obtaining a customized display of present space weather parameters, predicted levels of activity, impending solar storms, expected impacts, cumulative exposure, etc. for that particular mission and time selection.  Mission planners will be able to select a virtual mission, and simulate the specific space weather environment the spacecraft would be exposed to as if it were in orbit. This project will take full advantage of our team’s extensive experience with designing flexible interfaces for space weather visualizations that are readily accessible to researchers and non-experts alike.

GSFC has unique space weather modeling capabilities, highly specialized in-house technical expertise, and direct access to an abundance of data resources, which collectively and uniquely position the Center to provide an unrivaled capability for optimizing return from and reducing risk for all missions.  We anticipate immediate benefits for NASA as a whole, and ultimately for anyone interested in tailored space environment information for specific spacecraft and/or orbits (e.g., DoD).   Interest in this capability is routinely expressed thought the community, and reiterated annually at the NASA Robotic Mission Operator Workshop hosted at GSFC.

Our initial one-year deliverable will include an extensible and operational software framework that supports two or three specific NASA GSFC spacecraft, as well as generic/user-defined orbit functionality.  An interactive web-based user interface prototype will also be delivered. Future development could include increased mission support with the ultimate goal of supporting ALL NASA missions past and present.  Additional funding opportunities could arise from collaborations will external agencies (NOAA, DoD) as well the private sector,  as the functionality and utility of the SEA5 system would have broader impacts for non-NASA satellite and mission operators.