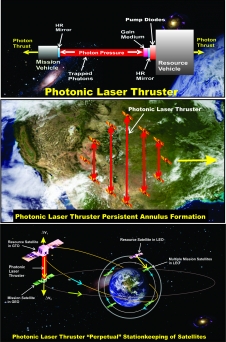 Until the former NIAC was closed, we had investigated a nano-meter accuracy formation flight method based on photon thrusters and tethers, Photon Tether Formation Flight (PTFF), with the maximum baseline distance over 10 km for the next generation NASA space missions. Since photons have extremely small thrust per power, thrust amplification by recycling photons between two high reflectance mirrors located separately in two pairing satellites was proposed to overcome the limit. Our original emphasis was on propellant-free nanometer accuracy tethered formation flying, however, during our study on photon thruster demonstration, we discovered that our photon thruster (Photonic Laser Thruster, PLT) has a much larger potential in NASA mission applications than precision tethered formation flying. The potential resulted from a surprising discovery on the extraordinary stability of PLT against dynamic motions of mirrors in our unique active optical cavity, which may enable in space propulsion for an extremely wide range of unprecedented NASA missions. For example, 10,000 times recycling of photons with 15 kilo-watt input laser power, which can be delivered by a 100 kW solar panel would produce up to 1 N of photon thrust, which is sufficient to enable these missions. One of most crucial technologies to scaling up and implementing the PLT is Directed Energy technology that has developed and matured long range delivery of high power laser beams. The state-of-the-art DE technology is capable of delivering powers of multi-mega-watts over distances of hundreds of km, and matured precision pointing and focusing capability. Recently, an AFRL researcher for DE unintentionally demonstrated ~5 mN (more than 100 times scaling up of our previous NIAC demonstration of 35 μN) photon thrust in PLT with the use of a kW-class Thin Disk Laser, although the laser was not optimized for PLT. Currently, the DE community is developing much higher power lasers, and the adaptation of such lasers for PLT can facilitate Newton-class PLTs in the near future. Therefore, the time has arrived to develop and implement PLT for a wide range of unprecedented in-space NASA applications and this is the motivation for the present NIAC Phase II proposal.

We propose development and flight demonstrations of PLT (photonic laser thruster)-based spacecraft as a means of reducing future space system weight & size and enabling unprecedented maneuverability. PLT-based spacecraft promises to enable innovative CONOPS to change how some NASA missions are conceived, and is a revolutionary departure from the \xd2all-in-one\xd3 single-spacecraft approach, where a primary factor that dominates spacecraft design is a heavy and risk-intolerant science payload. Instead, PLT-based spacecraft is a low TRL concept that has evolved from a different evolutionary path based on interbody dynamics via momentum beaming. This revolutionary path of PLT represents a technology push rather than a mission pull, and will enable an entirely new generation of planetary, heliospheric, and Earth-centric missions.