Integration of Voice and Gesture 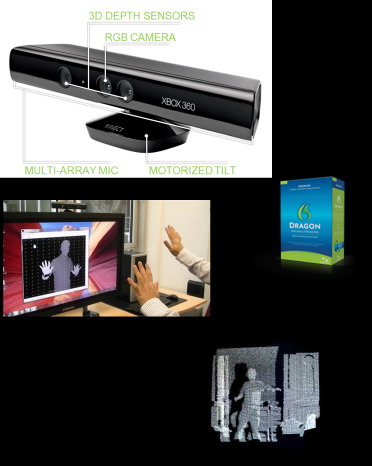 Speech recognition technology is relatively mature.  In spite of this it is not always accurate. Greater accuracy occurs when the speech is constrained by the context of the application. For instance, when using Siri to interact with an iPhone, there are a limited number of topics and interactions available. Gesture recognition is a newer technology, but is becoming viable, particularly with the advent of the Microsoft Kinect. Gesture recognition provides additional context for speech recognition; speech provides context for gestures. Integrating both would provide a much more robust environment for human computer interaction. Survey of the technical field was accomplished. Basic software and hardware, including microphones, cameras and 3D depth sensors was procured. Basic equipment functionality has been demonstrated. Groundwork has been laid for continued efforts.