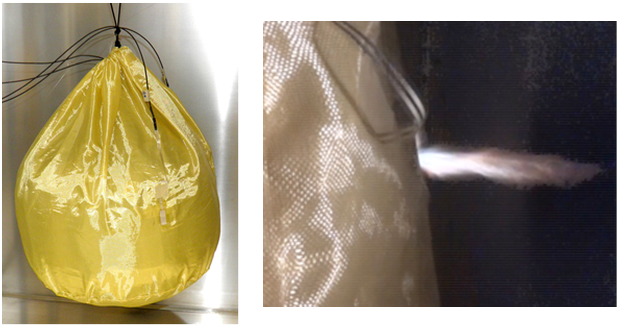 The purpose of this project is the development of particle impact detection technology for application to habitable space exploration modules, both in space and on the surfaces of Solar System bodies. This mission-enabling technology will be needed to improve the safety of future human exploration missions. Inflatable space structures have unique characteristics that would benefit from an instrument system for detecting impact penetrations and reporting the extent of these penetrations, as well as their size and location.  Building on previous experience, (i.e. the Habitat Impact Monitoring System (HIMS) hardware and software, which was developed for the Habitat Demonstration Unit) a system particularly adapted to the multilayer inflatable space structures can be developed.   The HIMS sensors represent a class of sensors that are both low mass, simply emplaced, and require little power or system resources.  This sensor system was applied to test sample coupons, representative of inflatable structures, modified as required, and subjected to hypervelocity impacts. Results of these tests allowed system verification for this type of space structure, with the ultimate goal to achieve an automatic impact location and characterization system for the inflatable space structure.

The goal of the Habitat particle Impact Monitoring System (HIMS) is to develop a fully automated, end-to-end particle impact detection system for crewed space exploration modules, both in space and on planetary surfaces.  When micrometeoroids or orbital debris impacts occur on a space habitat, crew members need to be quickly informed of the likely extent of damage, and then take appropriate actions to ensure the safety of the mission. HIMS uses multiple thin film piezo-polymer vibration sensors to detect impacts on a surface and characterize the impact locations and degree of penetration.  Installation of the HIMS sensors is easy, and does not require any major reconfiguration of the habitat structure. The detection capabilities of HIMS on a hard-shell structure were successfully demonstrated on the Habitat Demonstration Unit (HDU) Pressurized Excursion Module (PEM) during the 2010-2011 Desert Research and Technology Studies campaign. The main objective for the project in FY12 was to explore the feasibility of using HIMS for particle impact detection on multi-layer inflatable structures and determine optimum sensor configuration requirements for potential applications on future inflatable habitats. Hypervelocity impact tests were performed on a test article consisting of a spherical rubber bladder inflated within a Kevlar envelope "restraint layer". The tests showed that the system detects the impact in both the Kevlar layer and the rubber bladder.  The ring-down acoustic response of the simplified target indicates a signal detection range of at least 3 m from the point of impact.  It is hypothesized that an actual inflatable structure, with higher stiffness and thicker walls, would propagate the acoustical signals with less loss. Thus the system design and sensor configuration for inflatable structures is expected to be similar to designs and configurations already tested on rigid structures.

This mission-enabling technology will improve the safety of future human exploration missions.