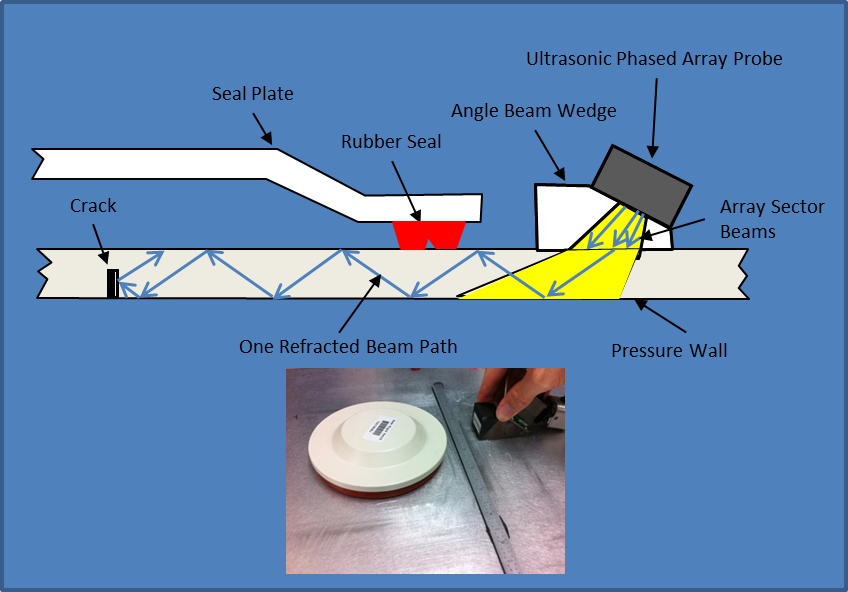 The project intends to develop a combined Ultrasonic and Eddy Current nondestructive evaluation (NDE) instrument for IVA use on ISS. A suite of IVA and EVA NDE technologies is necessary in order to meet the technology roadmap requirements of supporting the objective of in-space damage detection and repair. The ultrasonic and eddy current instrument is considered to be core to IVA NDE capability. The other promising IVA NDE technologies include portable X-ray, infrared NDE, and borescope inspection. The potential EVA technologies are X-ray backscatter imaging and Terahertz imaging. The project intends to qualify a general purpose ultrasonic eddy current instrument and a specific NDE application of detection of MMOD damage in aluminum wall of ISS structure. A kit containing the instrument, accessories, manuals will be defined after completing the necessary, qualification testing and modification.

Phased array ultrasonic testing (PAUT) instruments and array eddy current testing instruments were tested on hypervelocity impact damaged aluminum plates simulating the ISS pressure wall. Ultrasonic techniques were most successful in assessing the back side damage when a repair seal plate covers the damage. The ultrasonic instrument would be selected for implementation on ISS.

The in-space NDE technologies are needed in support of ISS, MPCV and future long duration manned vehicles. Due to long duration of manned missions, there is greater likelihood of damage from the MMOD impact on the habitable structures and systems supporting life and travel. In addition, the structures are subjected to environmental and operational degradation or damage. While IVHM sensors have been proposed to monitor the structures, focused area inspection tools are necessary for better evaluation of suspected damaged area detected by the IVHM sensors.
In order to meet the technology roadmap requirements of supporting in-space damage detection and repair, a suite of IVA and EVA NDE technologies is necessary. The IVA NDE technologies also include portable X-ray, infrared NDE, and borescope inspection. The potential EVA technologies are X-ray backscatter imaging and Terahertz imaging. A general purpose ultrasonic and eddy current instrument would provide capability beyond the NDE of suspect damage in the pressure wall of the habitable module. The instrument also supports the in-space manufacturing. The project lays groundwork for development of other in-space IVA NDE technologies such as borescope, infrared thermography and digital X-ray. In-space NDE is considered to be a system in itself and the project provides opportunity to NDE engineers, structures engineers, crew systems engineers and program management to accomplish objectives of the in-space NDE identified in the technology roadmap.