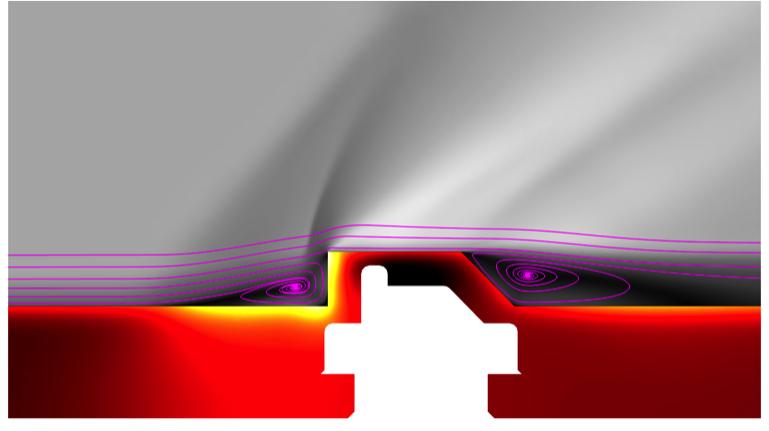 The thermal protection system (TPS) performance requirements for atmospheric entry vehicles on current and future NASA missions preclude the use of heritage reusable materials such as the tiles used on the Shuttle Orbiter.  The severe heating environments require the use of ablative TPS materials and innovative design concepts such as inflatable or deployable TPS require the development of new classes of non-rigid ablators.  Accurate modeling of such materials is required to minimize weight and maximize vehicle reliability.  Typically, ablator performance is predicted with computational models that solve the governing conservation equations for heat and mass transfer within the ablator.  The inputs for these tools come from decoupled flow field solutions.  Proper modeling of the complex interactions between the ablator and the flow field gases at the surface requires the physics of the ablator and the flow field to be coupled.  This project seeks to couple a hypersonic flow field solver with an ablation model in three dimensions.

A predictive tool with tight coupling of the fluid and thermal physics will give insights into the conservatism of the uncoupled design process and could lead to margin reduction and consequently reduced heat shield mass. This project seeks to couple the CHarring Ablator Response (CHAR) code and the Fully Implicit Navier-Stokes (FIN-S) code with finite-rate models governing the gas-surface interactions and surface mass loss.  Loose coupling has already been demonstrated between the codes for non-ablating materials, which helped identify and solve potential computer science and physical modeling issues. Additionally, the development team has already shown an ability to implement a multi-physics simulation framework as they have recently coupled thermal and structural physics modules within the CHAR code. The bulk of the work focuses on modeling the energy flux terms at the gas-surface interface. The current design approach requires gross assumptions or even neglecting terms in either the CFD or AMR analyses. Progress to date has included the integration of the software components into one executable that facilitates information exchange between the fluid and ablation physics.  The software has been demonstrated on both two and three dimensional ablation problems.  On going efforts include verification and validation of the new multi-physics software tool.

The products from this study will be immediately useful to the Orion-TPS and Orion-Aerosciences teams.  Both the aeroscience and TPS leads for Orion have expressed their support for this work and are willing to participate as infusion sponsors.  They expect that the coupled tool from this work could impact the EFT-1 Development Flight Instrumentation data analysis, and it would be used for EM-1 verification cycles.