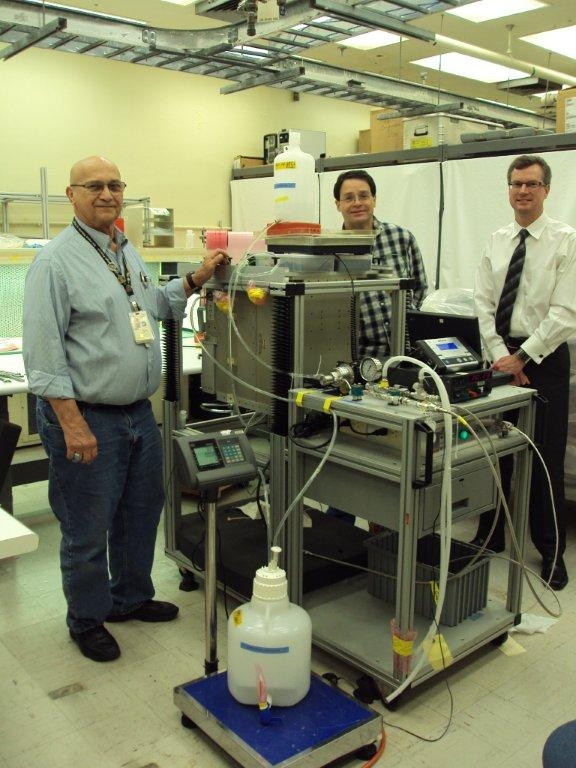 The primary objective is to conduct a pathfinder, suborbital flight experiment for two-phase fluid flow and separator operations.The primary purpose of this test program is to verify functional operations of a multi-phase flow system and unique separator for a relatively long duration suborbital flight, in support of future space vehicle designs and missions. Two-phase flow experimental studies at reduced gravities have been very limited, and primarily conducted using special aircraft modified to fly parabolas. This first suborbital flight would allow longer-duration, continuous operational testing with variable gravity over a wider range, for both the unique separator and two-phase flow design.

The NASA Johnson Space Center (JSC), Crew and Thermal Systems Division (CTSD), had previously developed an orbital flight experiment to 1) test the feasibility of a water purifier for use in zero-gravity conditions, and 2) demonstrate sustained operation of a two-phase flow system with a passive gas/liquid separator. By design, the influent fluid was kept under pressure to saturate the water with gas; however, farther downstream, the fluid mixture is returned to near atmospheric pressure and fed into a vortex separator. The separator and overall system function was designed for operation in both Earth-gravity and zero-gravity conditions. The gas within the system is vented off downstream of the separator, and most of the liquid is re-circulated in the processing loop over the duration of operations. MFEST proposes to modify the experiment to test the two-phase flow and separation functions without using simulated or active water processing. This creates the following benefits/features: this project  will test a two-phase flow system and vortex separator concept that continues to be considered for space applications, under the challenging environment conditions of launch, zero-g, and entry, and with sustained operations;  two-phase flow and separator systems are needed in numerous technical areas (e.g., life support, thermal, science) and have been identified as a critical technology; no long-duration testing for variable gravity has been accomplished for this separator concept/design, and it leverages outdated experiment/hardware (has been on the shelf for a decade) for future spaceflight missions. Multi-phase flow systems can be applicable to technologies designated in multiple draft Office of Chief Technologist (OCT) Space Technology Roadmaps: Technical Area TA02, In-Space Propulsion Technologies; TA03, Space Power and Energy Storage; TA06, Human Health, Life Support and Habitation Systems; TA07, Human Exploration Destination Systems; and TA14, Thermal Management Systems. The experiment was originally designed for the Space Shuttle mid-deck, but was never flown due to mass, crew time, and other mission limitations. For the suborbital flight opportunity, the primary purpose of the test program would be to verify functional operations of the flow system and unique separator for a relatively long duration with variable gravity, in support of future space vehicle designs and missions.

The Glenn Research Center (GRC) is using this type of separator for the Packed Bed Reactor Experiment (PBRE) being developed for ISS experimentation, with an ISS flight planned in CY14.  MFEST will share the data and modeling from this project with GRC in support of the PBRE implementation.