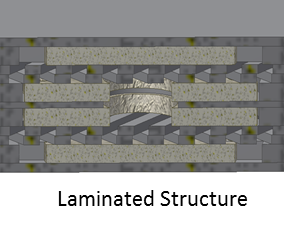 The primary goal is to build and test a rigid Lithium Chloride Absorber Radiator (LCAR) coupon based on honeycomb geometry that would be applicable for EVA and spacecraft applications.

This project builds from the work of the first year of effort that successfully integrated the Spacesuit  Water Membrane Evaporator (SWME), developed by the JSC Engineering Directorate,  and  the  Lithium Chloride Absorber Radiator (LCAR) developed by Creare Inc. as a flexible, bendable system, into a non-venting system for thermal control.  This system could be made more advantageous for spacecraft and Portable Life Support Systems (PLSS), from a mass and volume standpoint, by building  the structure of the spacecraft or the PLSS housing  with high-strength carbon fiber composite honeycomb,  the cells of which would be filled with the chemical absorption media.  In this way the multifunctional composite element provides structural strength, desiccant storage and the radiator surface area required for heat rejection.  A 2 ft2 panel will be constructed and tested in thermal and thermal vacuum conditions.  A flight-like regeneration system will also be built and tested. A thermal fluid model will be built and correlated  to the test data.   The entire stack would have a depth of 12 mm, and include the storage stack honeycomb of 8 mm in depth, an internal vapor header, and an external radiator face sheet.  In this way, the housing multifunctionally provides the necessary housing protective structure, desiccant storage capacity, and radiator surface to reject the heat. The 8mm depth of storage media suggests more efficient absorption resulting in a potential radiator temperature of 330K.  A similar arrangement would be useful in providing a non-venting topping function for orbiting spacecraft during low lunar orbit where both heat rejection requirements and 290 K peak sink temperature are relatively high.  Regeneration could be conducted during colder parts of the orbit where there is more available cooling for a condensing heat exchanger.