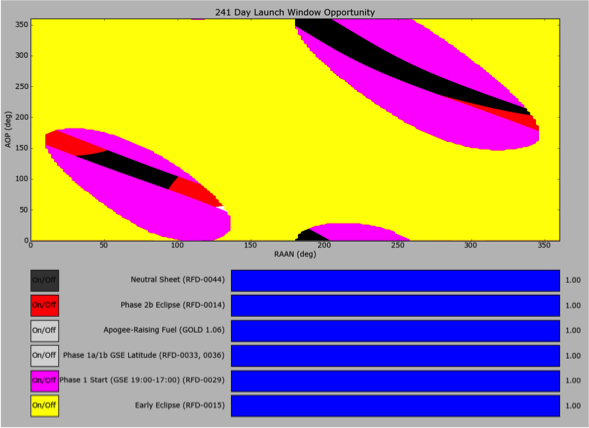 The aim of this IRAD is to produce a generic launch window analyzer (SWM) that allows for large-scale rapid analysis of a launch window and orbit design trade space.  This will be "game-changing", preventing missions that are in early definition studies, for instance in the Mission Design Lab (MDL), or new business efforts, from going into blind alleys.  The domain of applicability will be those missions whose orbit is well-modeled as Keplerian or perturbed Keplerian and includes a vast majority of missions (science, exploration, defense, or commercial), including many involving the new class of low-thrust small satellite platforms.

Using a set of accurate analytic Variation of Parameters (VOP) equations for orbit propagation, and a method for defining and 'mixing-and-matching' various mission constraints, the tool will allow flight projects to e.g. quickly determine launch opportunities, and explore the effects on these of relaxing mission constraints. The basic concepts involve taking advantage of the geometric notion of an orbit, the definition of a 'perturbation', and idea of 'geometric proxies'. Let us take these concepts in turn to better describe what SWM does.  The notion of an orbit is predicated on the use of Keplerian orbit elements to describe the trajectory of the spacecraft as if it were a 'bead on an elliptically-shaped wire'.  That is to say that the semi-major axis and eccentricity describe the shape and size of the wire; the inclination, right-ascension of ascending node, and argument of perigee describe the wire's spatial orientation; and the true anomaly describes where on the wire the bead can be found.  The concept of perturbation allows us to think about this elliptically-shaped wire as slowly changing its shape, size, and orientation as the spacecraft 'feels' a variety of environmental effects such as higher-order terms in the geopotential, luni-solar gravitational pull, solar radiation pressure, and atmospheric drag.  Note that the application of delta-Vs are accomplished by discontinuously changing the orbit using standard methods. These two concepts are traditional 'textbook' ideas.  The distinguishing trait of SWM is the marriage of these ideas with the notion of a geometric proxy.  To illustrate the idea of a geometric proxy, consider a typical space science mission that wants to place spacecract in situ in the Earth's geomagnetic tail.  The geomagnetic tail lies in or near the shadow of the Earth.  In SWM, the orbit is then mapped into a geometric coodainte frame which moves as the Earth moves about the Sun such that one of its axes always lies along the Earth-Sun line and another of its axes lies along the ecliptic pole.  In this frame the Keplerian elements are 'moving' such that the line-of-apsides advances like the hands of a clock.  The action of the perturbations serves to either enhance or retard this motion. Thus the orbit's motion can be mapped into this frame where the geomagnetic tail and the shadow cast by the Earth are essentially fixed.  The final step is then use the geometric properties of the orbit and the geometric properties of the geomagnetic tail and the shadow region to simply predict the how much time is spent in the tail compared with the time spent in shadow.  Using the geometric proxies, the mission desing space can be quickly explored and, with a few more steps to describe how this orbit is established from launch, a launch window can be generated.

Funded NASA Earth-orbiting missions will be able to use the capabilities of SWM to quickly evaluate the set of candidate orbits that satisfy all of the required orbital constraints.  This allows the flight dynamics engineer to determine the achievable launch windows, and the systems engineer to determine which constraints drive the orbit design, and so which it would be profitable to relax.  The MMS flight project has made extensive use in this way of SWM76, the prototype, MMS-centric version of SWM.