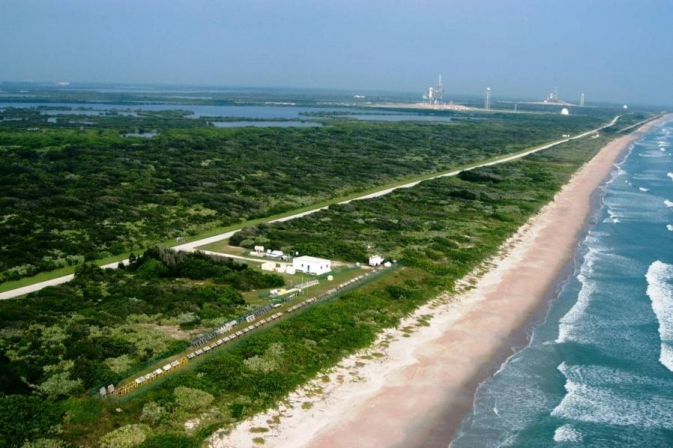 The objectives for this project are to identify, test, and develop qualification criteria for environmentally friendly corrosion protective coatings and corrosion preventative compounds (CPCs) for flight hardware and ground support equipment.

Kennedy Space Center (KSC) has undertaken a study to find environmentally friendly alternatives for the petroleum and solvent-based corrosion-preventive compounds (CPCs) used to protect flight hardware and ground support equipment. Film-forming CPCs leave either a soft or hard protective barrier that prevents moisture from directly contacting metallic surfaces, whereas thin and ultra-thin wicking CPCs displace moisture in cracks and crevices and leave a residue that repels further moisture. To protect an occluded region, the CPC must either form a barrier over the crevice mount or wick into the occluded region. In both film-forming and wicking CPCs, corrosion inhibitors are often suspended in a mixture of solvents and a base oil or grease. The base oil acts as a carrier fluid for the inhibitors and as a moisture barrier. The solvent, which is intended to evaporate after application, acts as a base oil and disperses the inhibitor. Although CPCs can be effective, the base oils are not environmentally benign and the solvents can be toxic and high in volatile organic compounds (VOCs).

The candidates tested for use at  KSC were soft-film CPCs, both common petroleum-based and newer environmentally friendly types. For this program, “environmentally friendly” refers to CPCs that are low in VOCs (less than 100 g/L), are not hazardous air pollutants, are nontoxic, and are non-carcinogenic. In Phase 1, the CPCs were applied to various steel and aluminum substrates, which were subjected to atmospheric exposure testing at KSC’s Beachside Atmospheric Corrosion Test Site, as well as to cyclic accelerated corrosion testing. Phase 2 consists of more rigorous testing of the down selected CPCs from Phase 1, new testing of hard-film CPCs, and a study of the failure mechanisms of the different CPC types. Phase 3 testing will determine end use application parameters, including material life cycles, application frequency, and compatibility testing with the specific end uses at the Kennedy Space Center so that they can be incorporated into current applications and future flight hardware and ground support uses.

Current CPCs are hazardous or require extensive containment. Environmentally-friendly alternatives require minimal containment and personal protection, and thereby allow their use at KSC to be expanded to areas where they were previously impractical. Alternatives would reduce ground operations life cycle costs, reduce launch site operations and maintenance costs, and improve system efficiency, reliability, maintainability, and operability