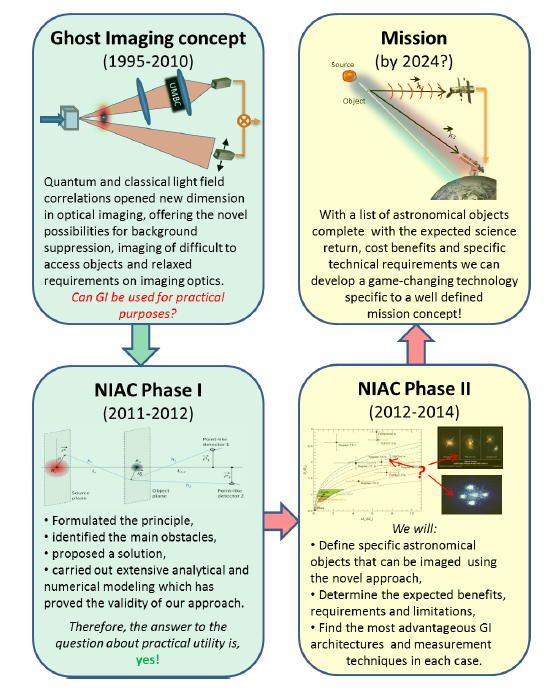 This team is studying whether or not quantum diffraction can increase the amount of information a telescope can receive from distant stars and galaxies. Particularly important is that the architecture being studied could have practical applications, as it does not require a beam splitter to be placed far in front of the telescope. The NIAC research effort entitled "The Ghost Imaging of Space Objects" has been inspired by the original 1995 Ghost Imaging and Ghost Diffraction experiments that harnessed quantum-correlated photons to recover an object's image from a measurement lacking spatial resolution, but utilizing an empty reference channel. Various applications of this phenomenon have been soon proposed, ranging from the optical imaging exceeding the classical resolution limit (Rayleigh limit), to the ultimately secure quantum communications and super-dense signal encoding. It was also realized, around 2004-5, that not only quantum-correlated but even a common thermal source of light can be used for the Ghost Imaging, although at a cost of a reduced contrast. Since then, the possibility of ghost-imaging of space objects has been intriguing many physicists. Unfortunately, the need for an optical beam splitter to be placed between the thermal light source (e.g., a star), the object and the observer severely diminished the practical value of this idea.

We aim to improve the technical methods and approaches available in the area of observation astronomy and directed to investigation of such important space objects as exoplanets, asteroids, gravitational lenses, gas and dust clouds, and others.