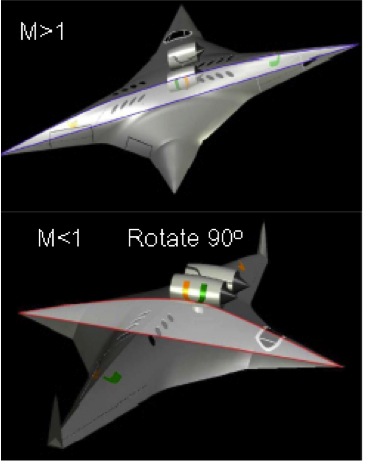 We propose a Phase I study for a novel concept of a supersonic bi-directional (SBiDir) flying wing (FW) that has the potential to revolutionize supersonic flight with virtually zero sonic boom and ultra-high aerodynamic efficiency. The SBiDir-FW planform is symmetric about both the longitudinal and span axes. For supersonic flight, the planform can have as low aspect ratio and as high sweep angle as desired to minimize wave drag and sonic boom. For subsonic mode, the airplane will rotate 90deg in flight to achieve superior stable aerodynamic performance. The conflict of subsonic and supersonic aerodynamic performance of conventional fuselage-wing configuration is hence removed. The preliminary CFD simulation for a SBiDir-FW business jet (BJ) at Mach numbers of 1.6 and 2.0 indicates that the configuration generates no N-wave sonic boom on the ground at a high lift to pressure drag ratio L/Dp of 16. The superior supersonic aerodynamic performance is benefited from the sharp nose and ultra-slender body with a low aspect ratio of 0.33, which translates to a very high subsonic aspect ratio of 33 for high subsonic performance. This proposal has three objectives: 1) design refinement of a supersonic SBiDir-FW BJ configuration using CFD; 2) mission analysis assisted with CFD simulation for the supersonic SBiDir-FW BJ to study the feasibility; and 3) wind tunnel testing of the SbiDir-FW BJ to verify its supersonic aerodynamic performance and sonic boom signature. The research team is highly qualified to perform the proposed tasks. More »

We propose a Phase I study for a novel concept of a supersonic bi-directional (SBiDir) flying wing (FW) that has the potential to revolutionize supersonic flight with virtually zero sonic boom and ultra-high aerodynamic efficiency.

September 2012: Project Start
October 2014: Closed out More » Less «
Closeout Summary: The supersonic bi-directional (SBiDir) flying wing (FW) concept has a great potential to achieve low sonic boom with high supersonic aerodynamic performance due to removal of performance conflict between high speed and low speed by rotating goo in flight. This NIAC Phase 1 research has achieved three objectives: 2) prove the concept based on simulation that it can achieve very low boom with smooth Sine wave ground over-pressure signature and excellent aerodynamic efficiency; 3) conduct trade study to correlate the geometric parameters with sonic boom and aerodynamic performance for further automated design optimization in Phase II. The design methodology developed in Phase I includes three parts: 1) an advanced geometry model, which can vary airfoil meanline angle distribution to control the expansion and shock waves on the airplane surface to mitigate sonic boom and improve aerodynamic efficiency. 2) a validated CFD procedure to resolve near field flow with accurate shock strength. The sonic boom propagation from near field to far field ground is simulated by NASA NF Boom code. The surface friction drag prediction is based on fiat plate correlation adopted by Seebass [1] and supported by the experimental study of Winter and Smith [2], which is on the conservative side and is more reliable than CFD RANS simulation. 3) a mission analysis tool based on Corke's model[3] that provides design requirements and constraints of supersonic airplanes for range, payload, volume, size, weight, etc. The design mission target is a supersonic transport with cruise Mach number 1.6, 100 passengers, and 4000nm range. The trade study has several very important findings: 1) The far field ground sonic boom signature is directly related to the smoothness of the flow on the airplane surface. The meanline angle distribution is a very effective control methodology to mitigate surface shock and expansion wave strength, and mitigating compression wave coalescing by achieving smooth loading distribution chord-wise. Compared with a linear meanline angle distribution, a design using nonlinear and non-monotonic meanline angle distribution is able to reduce the sonic boom ground loudness by over 20dBP1. The design achieves sonic boom ground loudness less than 70dBP1 and aerodynamic dynamic efficiency 1/D of 8.4. 2) Decreasing sweep angle within the Mach cone will increase 1/D as well as sonic boom. A design with variable sweep from 84° at the very leading edge to 68° at the tip achieves an extraordinarily high 1/D of 10.4 at Mach number 1.6 due to the low wave drag. If no sonic boom constraint is attached, SBiDir-FW concept still has a lot of room to increase the 1/D. 3) The round leading edge and trailing edge under high sweep angle are beneficial to improve aerodynamic performance, sonic boom, and to increase volume of the airplane. 4) Subsonic performance is benefited greatly from the high slenderness of supersonic configuration after rotating goo. A design with excellent supersonic aspect ratio of 0.44, 1/D of 8.g, gives an extraordinary subsonic aspect ration of 10 and 1/D of 1g.7. Two configurations are designed in details to install internal seats, landing gears, and engine installation to demonstrate the feasibility of SBiDir-FW configuration to acco=odate all the required volume for realistic airplane. In summary, it is proved numerically that SBiDir-FW can achieve very low sonic boom and excellent aerodynamic performance for both supersonic and subsonic. It is discovered that the airfoil meanline angle distributions are critical to mitigate far field sonic boom by achieving smooth surface loading distribution with weak shock, expansion waves and compression wave coalescing, whereas the sweep angle determining the aspect ratio has strong effect on aerodynamic efficiency of 1/D. It is expected that more improved designs will be achieved in Phase II with automated systematic design optimization. Here we emphasize that the qualitative findings in Phase I are very encouraging, more important than the quantitative results. Qualitative findings give the understanding of physics and provide the path to achieve the ultimate high performance design. The promising quantitative results achieved in Phase I need to be confirmed by wind tunnel testing in Phase II and ultimately proved by flight test. The other important step forward will be made to study the rotation transition from both CFD unsteady simulation and wind tunnel testing.