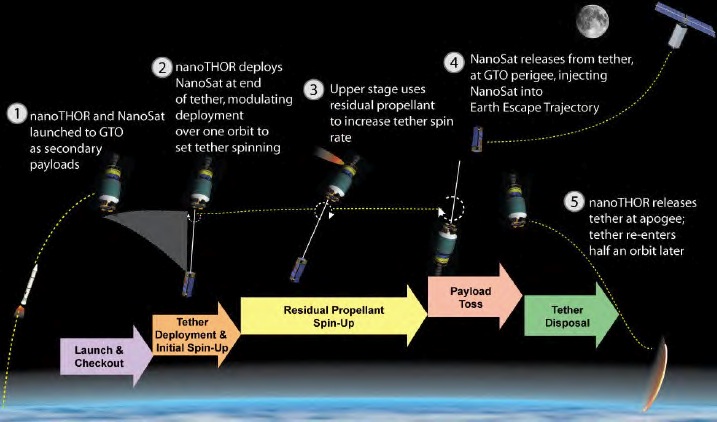 September 2012: Project Start
June 2013: Closed out More » Less «
Closeout Summary: In this Phase I effort, we have investigated the technical feasibility and value proposition for using a simple momentum exchange tether system to scavenge orbital energy from an upper stage in geostationary transfer orbit in order to boost nanosatellites to Earth escape. We developed and simulated methods to enable a NanoTHOR module to accomplish rapid transfer of a nanosatellite from a GTO rideshare to an Earth escape trajectory by deploying the nanosat at the end of a long, slender, high-strength tether and then using winching in the Earth's gravity gradient to convert orbital angular momentum into rotational angular momentum. These simulations demonstrated the feasibility of providing delta Vs on the order of 800 m/s with a simple, lowMmass tether system. We developed concept designs to enable the NanoTHOR tether to act as a reusable in-space upper stage, boosting multiple nanosatellites on a single launch and doing so with a mass requirement lower than that of conventional rocket technologies. Combining the NanoTHOR system to provide EarthMescape injection with a water electrolysis based thruster for maneuvering in heliocentric orbit, we developed a concept for an Asteroid Payload Express service, which enables a 6U CubeSat to deliver small payloads to Mars orbit, lunar orbit, and rendezvous with at least 110 of the known nearMEarth asteroids. Evaluation of the technology readiness of the components required for NanoTHOR indicate that the hardware required is all mid-TRL, and the lower-TRL controls and integration components can be advanced to midMTRL with modest investment. By scavenging orbital energy from upper stages without any stored energy or propellant requirements, NanoTHOR permits deep space nanosat missions to launch on rideshare opportunities, enabling NASA and commercial ventures to conduct affordable and frequent missions to explore deep space destinations.