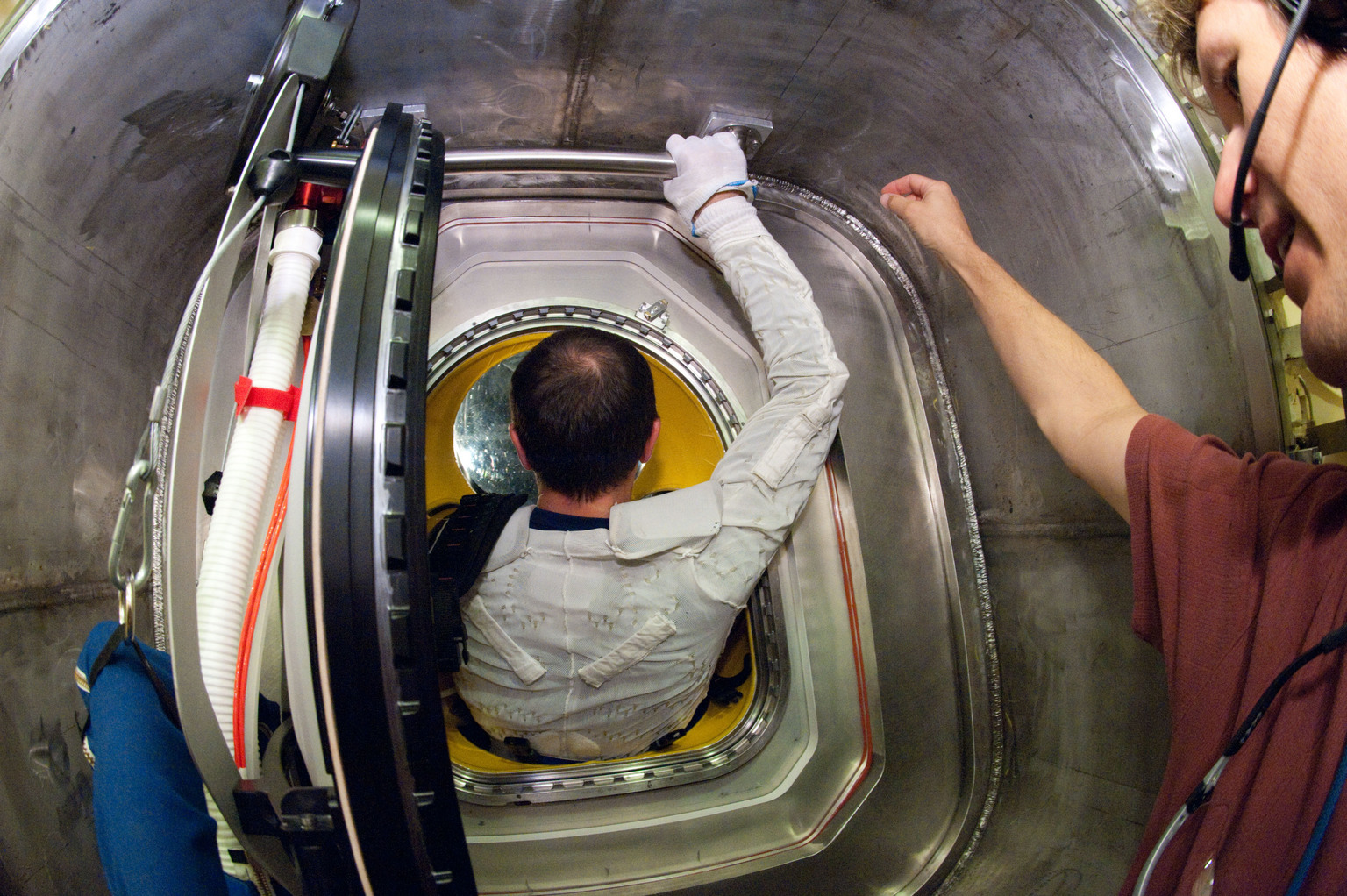 Suitports replace or augment the traditional airlock function of a spacecraft by providing a bulkhead opening, capture mechanism, and sealing system to allow ingress and egress of a spacesuit while the spacesuit remains outside of the pressurized volume of the spacecraft. This presents significant new opportunities to Extravehicular Activity (EVA) exploration in both microgravity and surface environments.

The suitport concept will enable three main improvements in EVA by providing reductions in: pre-EVA time from hours to less than thirty minutes; airlock consumables; and contamination returned to the cabin with the EVA crewmember. Suitports capitalize on the Atmospheres Working Group recommendation of an 8 psi and 32% cabin environment for exploration spacecraft. The reduced cabin pressure allows the suitport and the suit to be exposed to full cabin pressure while maintaining a lightweight, EVA-friendly design. Two different designs for a suitport were built and tested: the Marman and Pneumatic Flipper suitports.  Two generations of Marman suitports have been tested with mockup suits on rover cabins.  These tests have demonstrated the ability of test subjects to dock and undock from the suitport and have helped define the operational concepts and timelines, demonstrating the potential of suitport to save significant amounts of crew time before and after EVAs. The first generation Marman suitport has also been tested pressurized on a bench top engineering unit which has successfully demonstrated the pressurizable seal concept including the ability to seal after the introduction and removal of contamination (such as dust/soil) to the sealing surfaces. The second generation Marman suitport and the first generation Pneumatic Flipper suitport have also been tested with a spacesuit prototype using the pressure differentials of the spacecraft. The test was performed using the JSC B32 Chamber B, a human rated vacuum chamber. This test demonstrated the first ever pressurized donning and doffing of a rear entry space suit through a suitport. Suitport operations rely on the Advanced EVA project to design the advanced suit in a suitport-compatible manner, which presents significant challenges.  The suit must add a SuitPort Interface Plate (SIP) and withstand harsher storage environments. Life support system interfaces must be plumbed to the front of the suit to insure operation when installed in the suitport. The components of the life support system must be packaged to support this plumbing configuration and to allow for hinging of the life support backpack for rear-entry donning and doffing of the suit.

Should the ISS be able to isolate an area to 8 psi and install a suitport, short, rapid EVAs could replace the 16 hour EVA days experienced now.  However, to realize this benefit, the crew would have to live for long periods of time at 8 psi, which is not currently supported by ISS.

October 2011: Project Start
September 2012: Closed out More » Less «
Closeout Summary: To request closeout information for this project, please send an email with the Subject “TechPort Closeout Report Request” to hq-aes@mail.nasa.gov and specify which project closeout report you are requesting.