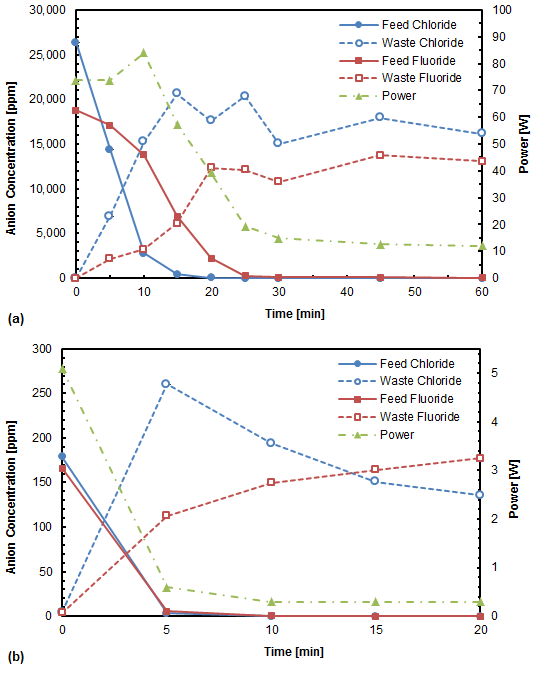 A main goal in the field of In Situ Resource Utilization (ISRU) is to develop technologies that produce oxygen from regolith to provide consumables to an extraterrestrial outpost. The processes developed reduce metal oxides in the regolith to produce water, which is then electrolyzed to produce oxygen. Hydrochloric and hydrofluoric acids are byproducts of the reduction processes, which must be removed to meet electrolysis purity standards. We previously characterized Nafion, a highly water selective polymeric proton-exchange membrane, as a filtration material to recover pure water from the contaminated solution. While the membranes successfully removed both acid contaminants, the removal efficiency of and water flow rate through the membranes were not sufficient to produce large volumes of electrolysis-grade water.

Prior to electrolysis, the water generated as an intermediate product must be treated to remove absorbed hydrochloric and hydrofluoric acids, byproducts derived from trace amounts of fluoride and chloride present in lunar regolith. In terrestrial applications, removal of chloride and fluoride from water is a relatively trivial process due to the availability of consumable adsorbents, or by utilizing other processes that require frequent regeneration. None of these processes are applicable in the lunar environment, however, where resources are scarce.

We previously studied Nafion, a commercially-available sulfonated tetrafluoroethylene polymer membrane, as an ISRU filtration material because it can continuously facilitate water transport and acid rejection without the need for replacement or regeneration. While Nafion showed promise as a filtration membrane, it was unable to remove sufficient quantities of contaminants, particularly fluoride, and would require very large membrane contact areas to generate appreciable quantities of clean water. Electrodialysis was chosen as an alternative water purification process for the present study, due to its extensive industrial pedigree and demonstrated ability to rapidly produce a clean water supply and concentrated waste brine.

Electrodialysis has shown significant promise as the primary separation technique in ISRU water purification processes. The success of this technology will reduce the cost of operating and maintaining In Situ Resource Utilization (ISRU) systems, enabling long-term deep-space missions.

Electrodialysis was chosen as an alternative water purification process for this study, due to its extensive industrial pedigree and demonstrated ability to rapidly produce a clean water supply and concentrated waste brine. Potential customers for this technology may include ISRU Environmental Control and Life Support System (ECLSS) Space Power Systems