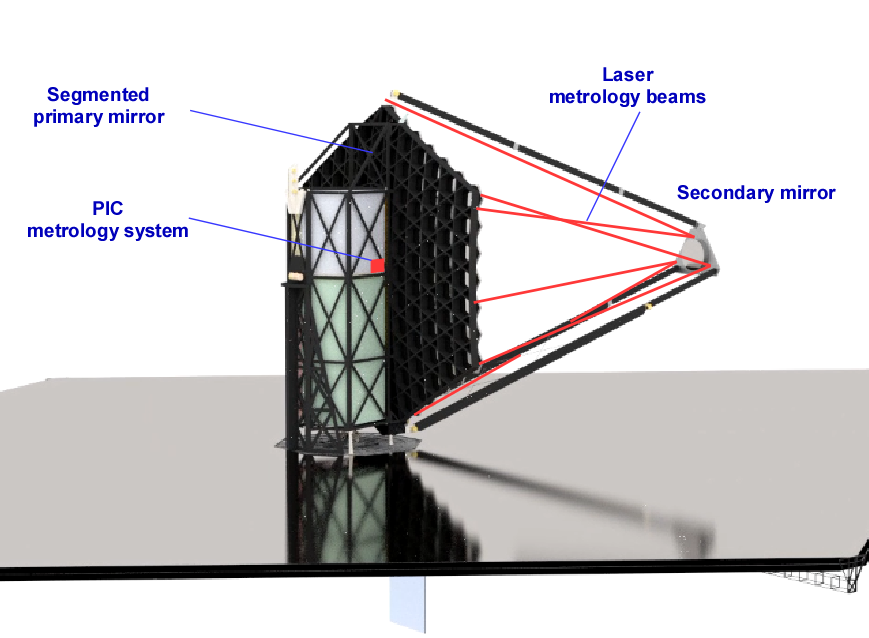 In this project, we will design an integrated photonics circuit (PIC) that includes all essential laser metrology functions necessary for active alignment of multi-segmented telescopes represented by LUVOIR. The proposed photonics-chip metrology laser concept would dramatically simplify the existing metrology system in size and mass, and improve performance by integrating components into PICs with a much smaller footprint.  This project will focus on designing the first prototype metrology PIC.

The ultimate goal is to produce a PIC metrology system with micrometer-level absolute and nano to picometer-level relative length variation measurement accuracy. Currently, PICs are used mainly for telecommunication and sensing applications, and not for precision laser metrology systems. We will utilize chip-scale wavelength references to further improve the metrology PIC performance. Capabilities provided by this technology are compact precision metrology system and integrated heterodyne interferometer. Potential applications for this technology include large-scale deployable telescope, coronagraph, and coherent laser ranging.

This project was successful in achieving most of the proposed objectives. Three photonic integrated circuit (PIC) were developed, packaged and evaluated. Each of the packaged PIC include two DFB lasers, a modulator, polarization combiner and a few couplers with different coupling ratios. We verified the performance of each device. Most components were functioning according to the design, however the optical power of the onboard DFBs were lower than expected, which could relate to manufacturing quality. By the end of the project, the first ever laser metrology PIC from GSFC was developed and tested and a few design changes has been proposed which can be implemented for future development to improve performance.

Task progress is evaluated twice a year at the Mid-term IRAD review and the end of the year. When the funding period has ended, the PIs compete again for IRAD funding or seek new sources of development and research funding, or agree to external partnerships and collaborations.  In some cases, when the development work has reached the appropriate Technology Readiness Level (TRL) level, the product is integrated into an actual NASA mission or used to support other government agencies. The technology may also be licensed out to the industry.

The completion of a project does not necessarily indicate that the development work has stopped.  The work could potentially continue in the future as a follow-on IRAD; or be used in collaboration or partnership with Academia, Industry, and other Government Agencies.