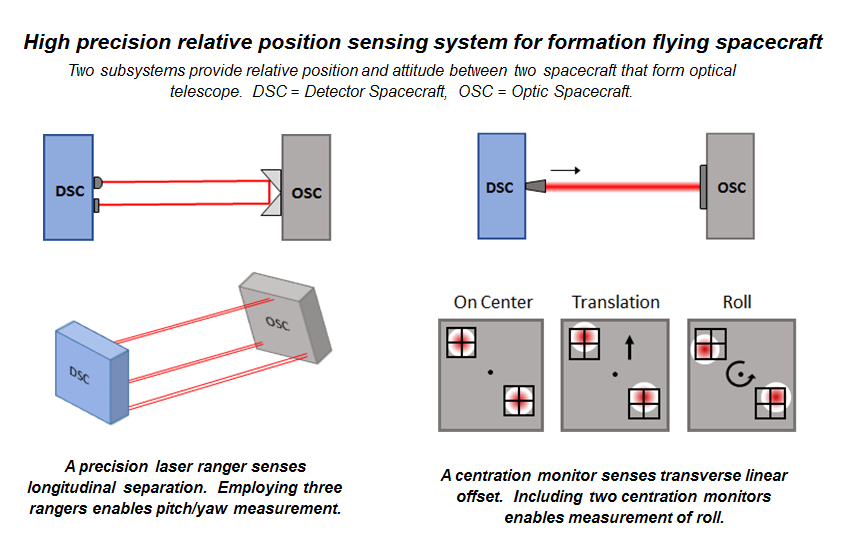 We propose to develop and test an optical sensing system that provides high precision relative position sensing for formation flying spacecraft.  A high precision optical ranger provides longitudinal position sensing to 0.1 mm precision for distances ranging from under one meter to hundreds of meters while an optical centration sensor provides transverse position sensing with 1 micron or better sensitivity.  Uses for this technology cover a broad range of science, including high resolution imaging and coronagraph imaging in Heliophysics, as well as X-ray imaging, gamma-ray imaging, and exoplanet imaging in Astrophysics.

We propose to provide a relative position sensing system that will enable the development of distributed optical telescopes in space. Our proposed relative position sensing system consists of two subsystems.  A precision laser ranger will use optical time of flight to measure the linear separation between two spacecraft while a centration monitor will sense linear motion transverse to the line of sight between the spacecraft.

Our proposed relative position monitoring system would enable a number of distributed instrument concepts based on formation flying spacecraft.  For example, a photon sieve solar imager operating in the EUV with ~1 milliarcsecond resolution would require adjustable spacecraft separations of hundreds of meters maintained to within millimeters.  Centration and attitude must be maintained to within a single pixel of the science detector.  Our system could meet these requirements, and would be modest in mass, volume, and power consumption.  It is likely that all six degrees of freedom could be sensed with a system consuming less than a total of 0.003 cubic meters (3u) distributed between the two spacecraft.  Our proposed system also has a major advantage beyond relative position accuracy.  The ranging system is based on laser communication technology, but the ranger only employs a small fraction of the overall data capacity.  If the ranger is operated at 622 Mbit/s, approximately 600 Mbit/s is available for communication between the spacecraft at the same time as providing ranging data with ~0.1 mm accuracy.  This potentially eliminates the need for a separate communication system between the two spacecraft.

Our near term goal is to mature technology to a sufficient level that it could be included in a precision formation flyer technology demonstration mission.  We believe that a cubesat mission would be sufficient to demonstrate this technology and could be proposed as early as late 2017.

We assume a distributed telescope comprised of two spacecraft where the detector spacecraft (DSC) is positioned in space according to existing technologies (e.g. star trackers, sun sensors, etc.) while the position of the optic spacecraft (OSC) is monitored and adjusted to remain in alignment with the DSC.     Our proposed position monitoring system consists of two subsystems:  a precision laser ranger and a centration monitor

Precision Laser Ranger:  A modulated laser beam is fired from the DSC toward a corner cube reflector mounted on the OSC and returned to a detector on the DSC. The time of flight is used to calculate the distance of separation (z).  This system is based on a laser communication method developed by Yang et. al. at GSFC.  It employs telecommunications 1.5 micron laser diodes and detector modules that have already undergone considerable testing and qualification.  High resolution relative position sensing between spacecraft is a new application for this technology.  Information imbedded in the header of the data packets is analyzed to provide the position data.

We expect our high precision laser ranger to operate over a range of distances from ~ 1m to greater than 1 km.  We predict the sensitivity of the position sensing to be better than 0.1 mm.  We have already tested the ranger in the laboratory for distances from 4.9 m to 23.4 m with a measurement precision of 0.1 mm or better.  It is possible that the ranger will operate at distances of tens or even hundreds of kilometers with the same level of precision.

Employing three laser rangers enables measurement of pitch and yaw of the OSC relative to the DSC.  The sensitivity to attitude changes by the rangers will be highly dependent on the placement of the sensors relative to the natural axes of rotation of the spacecraft.  With judicious system design, it will be possible to monitor relative attitude sufficiently to prevent smearing of the focused image on the science detector for pixel sizes on the order of 1 micron.

Centration Monitor:  A continuous wave (CW) laser beam is transmitted from the DSC to a lateral position sensor on the OSC.  The lateral position sensor tracks the location of the laser beam centroid, which provides a direct measurement of lateral relative motion (x & y).  Lateral effect sensors were developed to assist in the alignment of laboratory lasers and are commercially available with sensor areas of ~1 cm and centroid position sensitivities less than one micron.  A simple telescope is used to control laser beam divergence and ensure that the beam spot size remains within the range of sensitivity of the lateral position sensor.  If at least two such monitors are mounted well offset from each other, the position data from the two sensors can be compared to monitor roll of the DSC about the z-axis.

We propose to assemble one ranger and one centration monitor and test them at increasingly large longitudinal separations.  Our goal is to characterize and validate both systems in free space to a longitudinal separation of at least 500m.  We will identify and attempt to mitigate any design issues that arise.

1.  Demonstrate precision ranger operation in air to 100m optical path length:  Our existing system has been demonstrated to ~24m by reflecting the transmitter beam between mirrors on an optical table in our laboratory.  We will replace the existing collimator with a higher quality one to enable longer distance measurements.  We will characterize the system's sensitivities to alignment and environmental conditions for ranging distances ≥ 100m.

3.  Transition precision ranger system testing to 100m evacuated beamline:  We believe that free space operation in air of the ranger system limits the resolution of the range measurements to approximately 0.1 mm.  Eliminating air from the optical path will improve the precision of the ranger.  We will move the existing laboratory system to the 100m x-ray beamline facility located at the GSFC optical test facility.   The bulk of the work at this phase will be designing and constructing the hardware necessary to interface with the evacuated beamline.  Once the interface is complete, we will duplicate the 100m measurements made in the laboratory to validate the vacuum test set-up and further characterize the ranger's performance.  If possible, we will implement multiple reflections of the beam to achieve range distances > 100m.

The proposed technology will enable the construction of large optical telescopes in space consisting of two or more small, less expensive spacecraft rather than one large spacecraft.

Two sensor subsystems were successfully developed: a high precision laser ranger and a transverse position sensor.  The ranger was demonstrated to have 23 micron precision at a distance of 150m while the transverse sensor achieved ~40 micron precision at 100m.  An integrated guidance, navigation and control algorithm was also developed and underwent “hardware in the loop” testing.  Transverse alignment was maintained within +/-5 microns for 5 minutes at a range of 20m.  This project has transitioned to a new funding source to  further refine the sensor system design.

Task progress is evaluated twice a year at the Mid-term IRAD review and the end of the year. When the funding period has ended, the PIs compete again for IRAD funding or seek new sources of development and research funding, or agree to external partnerships and collaborations.  In some cases, when the development work has reached the appropriate Technology Readiness Level (TRL) level, the product is integrated into an actual NASA mission or used to support other government agencies. The technology may also be licensed out to the industry.

The completion of a project does not necessarily indicate that the development work has stopped.  The work could potentially continue in the future as a follow-on IRAD; or be used in collaboration or partnership with Academia, Industry, and other Government Agencies.

Show
The Sun, Outside the Solar System, Foundational Knowledge