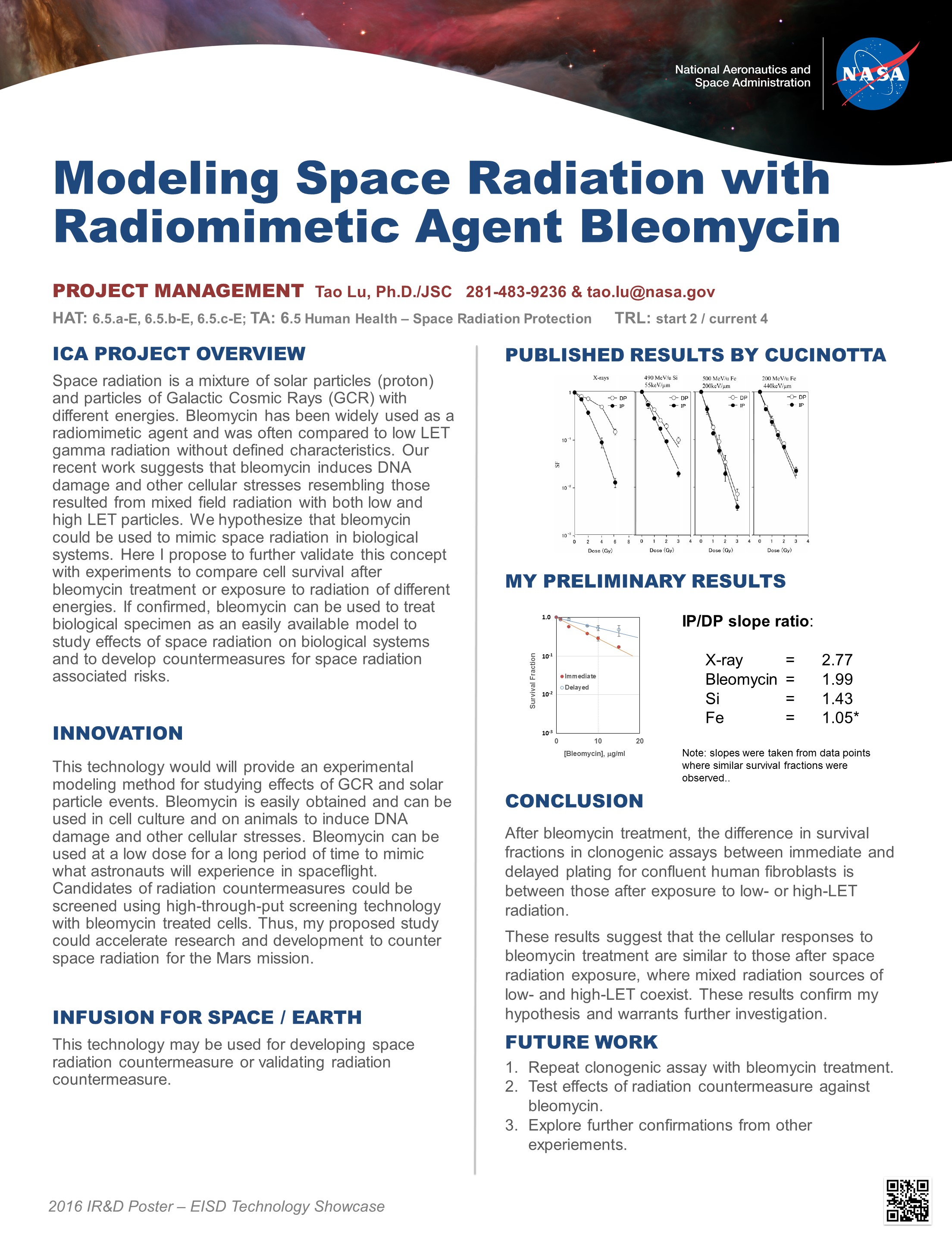 Space radiation is a mixed field of solar particle events (proton) and particles of Galactic Cosmic Rays (GCR) with different energy levels. These radiation events are difficult to model for Human Space Flight research.  Currently bleomycin has been widely used as a radiomimetic agent and was often compared to low Linear Energy Transfer (LET) gamma radiation without defined characteristics.

During spaceflight, astronauts are exposed to space radiation which increases health risks in cancer development, degenerative tissues, immune systems, and others. Currently, most studies of radiation effects on human were based on single source radiation. In the contrast, space radiation consists of a mixture of protons from solar particle events, , heavy ions from galactic cosmic rays (GCR). There is no easily available method to model effects of space radiation on living organisms. While NASA Space Radiation Laboratory is working on advanced switches to make it possible to have a mixed field radiation with particles of different types and energies, the radiation source will be limited. The effects and outcomes of mixed field radiation are poorly understood due to this limitation. Development of an easily available experimental model for studying effects of mixed field radiation could greatly speed up our progress in understanding the molecular mechanisms of damages and responses from exposure to space radiation, and facilitate the discovery of protection and countermeasures against space radiation, which is critical for the mission to Mars.

Recently, we demonstrated that bleomycin-induced DNA damage is of characteristics of those resulted from both low- and high-LET radiation in confluent human fibroblast. Published results showing that the same human fibroblast in confluency had different survival rate after exposure to low- or high-LET radiation. Bleomycin will be used to treat fibroblast under the same growth condition. Survival rates after treatment will be compared to the published results. It was also shown that some radiation countermeasures, e.g., the growth factor granulocyte colony-stimulating factor (G-CSF) are effective against mixed field radiation, but not others, e.g., the thrombopoietin (TPO) mimetic ALXN4100TPO. Effects of those radiation countermeasures against bleomycin treatment would be tested. These tests could provide further evidences for using bleomycin to model mixed field radiation exposure.

This investigation will provide an experimental modeling method for studying effects of GCR and solar particle events. Bleomycin is easily obtained and can be used in cell culture and on animals to induce DNA damage and other cellular stresses. Bleomycin can be used at a low dose for long a long period of time to mimic what astronauts will experience in spaceflight. Candidates of radiation countermeasures could be screened using high-through-put screening technology with bleomycin treated cells. Thus, my proposed study could accelerate research and development to counter space radiation for the Mars mission.

Once this investigation confirms my hypothesis. This modeling method could be used to study effects of mixed field radiation on different celllines or animals, to understand mechanism of molecular responses and actions, and to screen effective countermeasures that can be easily adapted for high-through-put screen using celllines. Thus, this investigation could greatly benefit NASA's mission on exploration of Mars.

The main goal of this proposed study is to validate a model system to speed up basic researches on the effects of space radiation, including solar particle events and galactic cosmic rays, on the health risks of astronauts during long term spaceflight missions, e.g., mission to Mars. If proposed study confirms the hypothesis, this model system could be used for high-through-put screening of candidates of radiation countermeasures that will be used to protect astronauts.