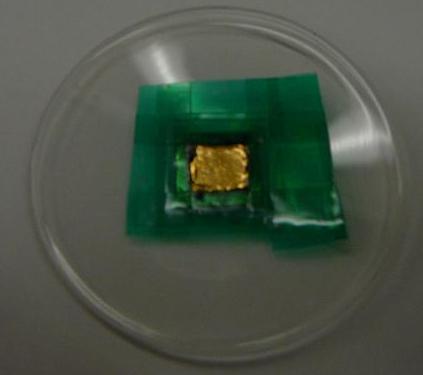 The areal density of solar sails and laser sails is large due to the heavy support structure made of Mylar, Kapton or CP-1. Replacing this support structure with graphene essentially eliminates this mass resulting in a 87% weight savings compared to traditional solar sails, given that graphene is one-atom thick. This weight savings allows for more payload mass, greater acceleration or a combination of the two.  This project will investigate if graphene can be used as the solar sail support structure and if significant improvements in areal density can be achieved.  The objective of the project is to show feasibility of fabricating light sails by coating a thin layer of metal on a graphene support structure to obtain low area density sails.  Graphene is a single atom thick layer of carbon which is invisible to the naked eye. It often comes on a metal substrate such as nickel or copper.  The graphene will be characterized by using Raman Spectroscopy to determine the quality and coverage of the surface.  Our approach will use the substrate as a support structure by covering the metal on the edges so the middle section is etched away when it is suspended in the etchant, leaving a free graphene layer suspended in air.  This graphene will then be coated with a thin layer of metal by sputter coating a 100 or 50 nm thick layer.  Another approach will be to first sputter coat the metal and them etch away the nickel or copper substrate.  The edges of the substrate will be covered by tape and the middle section will be etched away.  Low areal density solar sails could enable interstellar probes, which investigate exo-planets for life and human habitability. The nanosystems, which would be the by-product of the solar sails, could enable not only many benefits for space technology but also could help spur forward the nanotechnology revolution, bringing forward many economic benefits. Future work will consist of developing low areal density sails with high-reflectivity and high-temperature optimized to enable the highest possible acceleration both for solar and laser sails. Both methods were attempted and the second method enabled us to fabricate the sail.  Some of the challenges found in the process was the surface tension in the etchant which tended to pull on the graphene causing it to break away from the substrate and float on the surface.  Graphene typically has many cracks and imperfections which we believe enabled the material to separate away coupled with the chemical process.  After modifying the approach, we were able to make some sail samples which we tested using Raman Spectroscopy.  The metal sail layer does shield out the Raman Spectroscopy signature of the graphene so verification of the graphene was not completely possible since the signature was shielded out, but some evidence was apparent.  An attempt was made to use AFM to verify that the graphene layer exists and supports the metal layer, but technical issues with the Atomic force microscopy (AFM) prevented us from obtaining results.  Ultraviolet-visible spectroscopy (UV-Vis) was used to quantify the optical transmissivity at various wavelengths, which was very low at about 2%.  The optical reflectometer  was not operational due to a recent failure in the system, so no true values on reflectivity were obtained.  Once this equipment is operational, testing will be conducted on the reflectance of the material.  The work is significant because it lays the groundwork for interstellar precursor missions for human exploration.