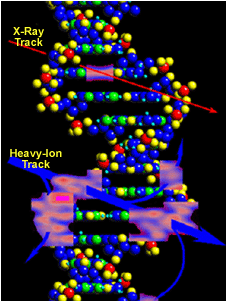 The overarching objective of the RadWorks project is to mature and demonstrate affordable, enabling solutions that mitigate radiation-related challenges of human exploration beyond Earth's orbit.

RadWorks technology is categorized as a hardware system for other applications.  Since its inception in FY12, the RadWorks project has had as its overarching objective to mature and demonstrate affordable, enabling solutions to mitigate the radiation-related challenges of human space exploration.  This has been done through the maturation and demonstration of system-level monitoring and design solutions.  Since FY12, the project has continued to develop and deliver affordable, prototype and flight caliber element-integrated monitoring and alert/warning subsystems capable of enabling both ground-supported and autonomous architectural operations.  In addition, the project has been doing comparative assessments of data collected utilizing radiation modeling programs, as well as producing advancements of modeling capability to enable protection and operational efficiencies for radiation shielding.

Every year the portfolio of technology work can change.  In FY19, the RadWorks project is continuing its maturation and flight certification of advanced, miniaturized radiation measurement technologies, along with their demonstrations.  The RadWorks project successfully flew the Battery Operated Independent Radiation Detector (BIRD), a simplified, non-integrated version of Radiation Environment Monitor (REM) aboard the Multi-Purpose Crew Vehicle (MPCV) Exploration Flight Test-1 (EFT-1) to validate system operation in a space radiation environment and record charged particle data for post-flight analysis.  In addition, there are ten REM sensors flying on the International Space Station (ISS).  These sensors are plugged into laptops and are measuring the ionizing radiation environment at different locations in the vehicle. Seven of these sensors transitioned to Flight Operations in June of 2019.

The Miniaturized Particle Telescope (MPT), a stacked version of the REM sensor is also flying on the ISS as a test instrument to investigate alternate configurations of the TimePix technology.  The Hybrid Electronic Radiation Assessor (HERA), which is slated to fly as a Flight Test Objective (FTO) on the MPCV Experimental Module-1 (EM-1) flight, has been successfully integrated into the capsule awaiting flight in 2020.  The flight spare for this launch is currently on ISS and successfully collected data for a 30-day end-to-end test that began in March 2019.

The next generation of the HERA is slated to fly on the MPCV EM-2 flight, as an integrated part of the Caution & Warning System (CWS).  A payload, the Fast Neutron Spectrometer (FNS), developed by Marshall Space Flight Center (MSFC) is currently flying and collecting data on the ISS.  Modeling work conducted by the project, which is being utilized by multiple vehicle developers, includes updates to modeling capabilities for determining sheltering needs in vehicle designs, as well as assisting with vehicle layouts to maximize crew protection capabilities. Shielding concepts are being assessed to enhance safe days in space.